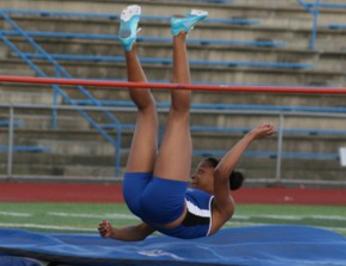 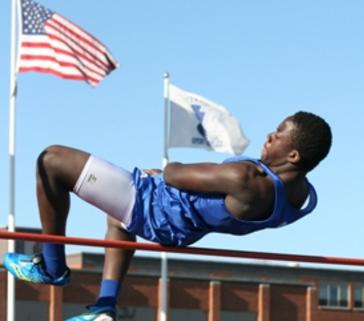 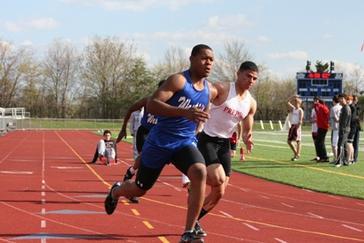 Westies struggle in SCC’s
WH places 19th in SCC Championships
By MIKE MADERA
Westie Blue
(May 21, 2012) - The West Haven girls’ track team placed 19th in the Southern Connecticut Conference championships at Sheehan High Monday afternoon. Hillhouse won the title with 130 points, while Amity (87) and Hand (71) rounded out the top three.
On a damp and rainy day, Savannah Brown had West Haven’s best showing as she was fifth in the high jump at 4 feet-10 inches.
Brown was also part of the 4x100 medley relay team which placed tenth. That team consisted of Whitney Shipp, Waverly-Rose Brim, Deniesha Kerr-Waller, Brown, Ebonie Routh and Elisean Jacobs.
Kerr-Waller was 20th in the 200 meter dash in 27.94 seconds and Brim was tenth in the long jump at 15-01.

Brown leads Westies
Junior has solid day in SCC West Sectional
By MIKE MADERA
Westie Blue
(May 16, 2012) – The West Haven girls’ track team placed ninth in the Southern Connecticut Conference Western Sectional Meet Wednesday afternoon in Woodbridge. Wilbur Cross won the event with 144 points and was followed by North Haven, Mercy, Branford and East Haven to round out the top five.
Deneisha Kerr-Waller was ninth in the 200 meter dash in 28.05 seconds, while Savannah Brown was three slots behind in 28.33 seconds.
West Haven placed eighth in the 4 x 100 meter relay in 53.83 seconds with a team of Whitney Shipp, Waverly Rose Brim, Kerr-Waller and Brown.
Brown also did well in the high jump, placing third at 5 feet-2 inches. Brim was fifth in the long jump at 15-02.

Girls fall to Hamden
Green Dragons post 97-39 victory
By MIKE MADERA
Westie Blue
(May 8, 2012) – Winning just four events, the West Haven girls’ track team fell to Hamden Tuesday afternoon, 97-39, in Hamden.
Sophomore Alexis Goodhue was the star for West Haven, winning two events. Goodhue was victorious in the 100 hurdles in 19.8 seconds and also won the 300 hurdles in 58.2.
Junior Waverly Rose Brim took home the 100 for the Westies in 13.7 seconds and junior Savannah Brown was victorious in the high jump at 4 feet – 8 inches.

Westies fall to East Haven
WH posts only two first place finishes in loss
By MIKE MADERA
Westie Blue
(April 24, 2012) – The West Haven girls’ track team was defeated by East Haven Tuesday afternoon 116-35. The Easties won all but two events to post the big margin of victory.
West Haven’s only victories came in the discus and high jump. In the discus, Brianna Grillo won with a throw of 75 feet, 7 inches, while Savannah Brown won the high jump at 4-8.

Westies Fall
Drop to 0-4 after loss to Mercy and North Haven
By MIKE MADERA
Westie Blue
(April 10, 2012) - The West Haven girls' track team fell to 0-4 after losing to Mercy and North Haven Tuesday afternoon in West Haven. The Westies fell to Mercy 98-39 and North Haven 123-23.
The Westies had only three first place finishes, with Savannah Brown taking home two. Brown was victorious in the high jump at 4 feet, 10 inches and also won the 200 in 28.2 seconds. Terra Gamble was victorious in the shot put with a throw of 30 feet, 4 inches.

Young Team Ready To Go
Youth is key to West Haven season
By MIKE MADERA
Westie Blue
West Haven coach Modestine Vaughn is well aware her girls’ track team is young. The coach also knows there may be growing pains this season.
Vaughn starts the 2012 season with plenty of hope. That hope with plenty of coaching can go a long way for the Westies.
“We are a young team with little experience,” Vaughn said. “We started out with thirty kids and we have stayed consistent with about twenty or twenty-five. We are really light this year. We usually start with sixty.
“We do not have the numbers to win meets. We want the girls going into the meets trying to win their events. That is what we are looking for.”
The Westies are led by senior co-captains Tania Lima and Briana Grillo.Lima will run the 800, 4 x 800 and throw the pole vault, while Grillo is a thrower, shot put and discus, and will also do the triple jump.
Junior Savannah Brown will compete in the high jump and will run in the 200 and the 4 x 100 and 4 x 400 relays. Senior Whitney Shipp will run the 400, 4 x 100 and 200, while junior Tierra Gamble is a thrower and sophomore Alexis Goodhue is an up and coming hurdler.
“We are looking for self improvement,” Vaughn said. “We will try to win the events we are competing in. We want as many kids as possible to makes the state tournament.”
Sophomores Eliseah Jacobs, Deneisha Kerr-Waller and Statrell Miller will all play a big role on the team as well. Jacobs is a sprinter, Kerr-Waller is a break out sprinter and hurdler and Miller is a thrower.
West Haven opens the season Thursday, April 5 at Sacred Heart Academywith Career at 3:45 p.m. 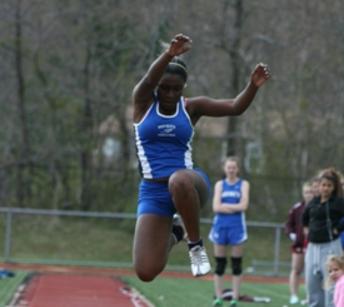 Westies finish 18thin Class LL
Williams and Manning lead the way
By MIKE MADERA
Westie Blue
(May 30, 2012) – The West Haven boys’ track team did well in the Class LL state championships Wednesday afternoon. The Westies finished 18th out of 25 teams with 13 points.
Staples won the title with 97.33 points, while Conard was second with 62 points and Danbury third with 61.
Eddy Williams was sixth in the 100 meter dash in 11.40 seconds, while Tahir Manning was fourth in the long jump at 20 feet – 1.50 inches.
The 4 x 100 team also did well, placing fourth in 43.57 seconds. Alex DeVarez opened the race, followed by Robert Hayes, Jawaun Manning, Tahir Manning, Bobby Sampson and Williams.
West Haven will compete in the State Open, Monday, June 4, in New Britain.

Good Show
Westies place sixth in SCC West Meet
By MIKE MADERA
Westie Blue
(May 16, 2012) – The West Haven boys’ track team placed sixth at the Southern Connecticut Conference Western Sectional Meet at Amity High School Wednesday afternoon. The Westies finished with 57 points.
Branford won the meet with 131 points and was followed by Xavier, North Haven, Hamden and Fairfield Prep.
Bobby Sampson and Eddy Williams did well in the 100 meter dash as Sampson was second in 11.36 seconds and Williams was right behind in 11.40 seconds. Jawaun Manning placed sixth in the 200 meter dash in 23.66.
Sampson again was a top five finisher in the 400 meter dash as he placed fifth in 51.45 seconds. Eric Singleton was seventh in the 110 meter hurdles in 18.02 and Eddie Lugo and Denzel Asson were ninth and tenth in the 300 meter hurdles.
The 4 x 100 meter relay had a great showing as well. The team of Williams at the start, Manning, Sampson and Robert Hayes placed second with a time of 45.51.
In the high jump, Singleton was second with a jump of 5 feet, 8 inches. In the long jump, Alex DeVarez was ninth at 17-11.50. Kadialy Toure was eighth in the triple jump at 37-10.
Matt Jones was eighth in the shot put at 37-10 and Charlestone Gourdet was third in the discus at 113-07 and Louis Lublin was eighth in 100-02. Qusaan Hoskie was fifth in the javelin at 123-05 and Julius Vasilescu was ninth at 112-09.

Westies Sweep
Defeat Fairfield Prep and Cross to move over .500
By MIKE MADERA
Westie Blue
(May 8, 2012) – The West Haven boys’ track team had an impressive showing Tuesday afternoon as the Westies swept Fairfield Prep and Cross. The Westies were in control, defeating the Jesuits 84-57 and Cross 82.5-58.5.
While the Westies placed first in seven events, their depth also allowed for the big margins of victory. Eddy Williams had a big day for West Haven as he was part of three winning events.
The Westies were victorious in the 4 x 100 relay with Eddy Williams, Bobby Sampson, Jawaun Manning and Tahir Manning posting the victory in 44.5 seconds.
Williams was victorious in the 100 in 11.4 seconds and Sampson won the 400 in 53.2 seconds. Williams also won the 200 in 23.9 seconds.
Tahir Manning did well in the jumping events, winning the long jump at 19-9 and the high jump along with Eric Singleton at 5-8. Chris Graham won the triple jump at 38-9.

Swept
Westies fall to Shelton and Hamden
By MIKE MADERA
Westie Blue
(May 3, 2012) – Placing first in just four events, the West Haven boys’ track team fell to both Hamden and Shelton Thursday afternoon. The Green Dragons defeated the Westies 77-64, while Shelton posted a 78-72 victory.
West Haven’s victories came in the 110 hurdles, 100, long jump and high jump. Gary Williams won the 110 hurdles in 17.8 seconds and Eddy Williams won the 100 in 11.4.
Tahir Manning won the jumping events, taking home the long jump at 19 feet – 1 inch and the high jump at 5-10.

Too Tough
Westies fall to Law
By MIKE MADERA
Westie Blue
(April 26, 2012) – The West Haven boys’ track team ran into a tough Jonathan Law team in Milford Thursday afternoon. Winning just four events, the Westies fell to Law 87-59.
The Westies were victorious in the javelin with a throw of 120 feet by Qusaan Hoskie and also the discus with a throw of 104-4 by Charlestone Gourdet. Tahir Manning was victorious in the high jump at 5-10.
West Haven won a running event as well against a strong Law team. Louis Lubin won the 800 in 2 minutes, 20.7 seconds.

Westies Sweep
Solid day in victories over Lyman Hall, Career and Foran
By MIKE MADERA
Westie Blue
(April 17, 2012) -  The West Haven boys’ track team’s drive back from Wallingford was a good one Tuesday afternoon. After posting eight first place finishes, the Westies defeated Lyman Hall, Career and Foran at Lyman Hall.
West Haven defeated the Trojans 94-47 and Career 117-24. The Westies also posted a 107-42 victory over Foran.
The Westies were victorious in the 4 x 100 as Eddy Williams, Bobby Sampson, James Moore and Jawaun Manning won in 45.5 seconds. Williams won the 100 in 11.4 seconds and Faidal Somda was victorious in the 1600 in 4 minutes, 59 seconds.
Moore won the 400 in 56.2 seconds, freshman Eric Singleton won the 300 hurdles in 48.0 seconds and Sampson was victorious in the 800 in 2:19.2.
Manning posted a victory in the 200 in 23.5 and Mark Berretta won the 3200 in 12:38.

Westies Split
WH beats East Haven but falls to Branford
By MIKE MADERA
Westie Blue
(April 10, 2012) – The West Haven boys’ track team improved to 2-1 on the season with a split in its meet with Branford and East Haven at Branford Tuesday afternoon. The Westies fell to the Hornets 140.50-40 but beat East Haven just as easily, 110-39.
Eddy Williams and James Moore had big days for the Westies. Williams was part of the victorious 4 x 100 relay team along with Moore and also won the 100 and the 200.
The 4 x 100 team consisted of Williams, Moore, Bobby Sampson and Jawaun Manning and won in 44.9 seconds. Williams won the 100 in 11.6 seconds and the 200 in 24.2 seconds. Moore was victorious in the 400 in 55.1 seconds.
West Haven also had a winner in the throwing events. Charlestone Gourdet was victorious in the discus with a throw of 102 feet, 9 inches.

Westies defeat ND in season opener
WH rolls in 33-point victory
By MIKE MADERA
Westie Blue
The West Haven boys’ track team opened the 2012 season against their cross-town rival Notre Dame and started in impressive fashion. Taking home ten first place finishes, the Westies rolled over Notre Dame 87-54 at West Haven High.
The Westies picked up one victory in the relays as the 4 x 100 team won in 45.0 seconds. The winning team consisted of Eddy Williams, Bobby Sampson, Jawaun Manning and James Moore. Williams also won the 100 in 10.9 seconds.
Qusaan Hoskie won the javelin with a throw of 117 feet, 9 inches. Alex DeVarez took home the long jump at 18-4.25, Eddie Lugo won the high jump at 5-2, Kadialy Toure won the triple jump at 36-7 and Louis Lubin won the discus at 108-6.5.
Moore was victorious in the 400 at 54.0. Sampson won the 800 in 2 minutes, 20.3 seconds and Williams also posted a victory in the 200 in 23.6. 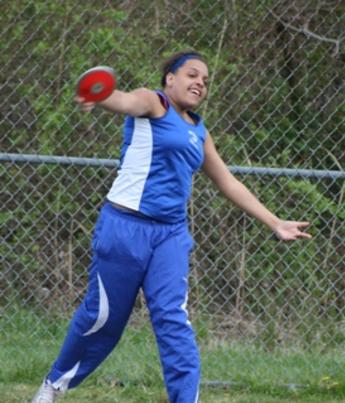 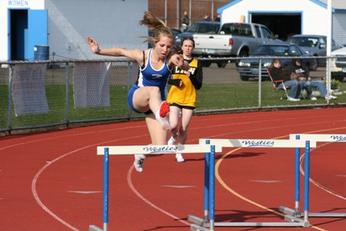 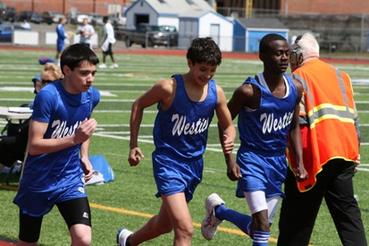