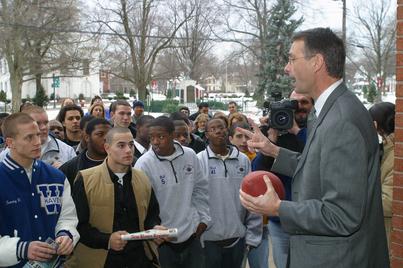 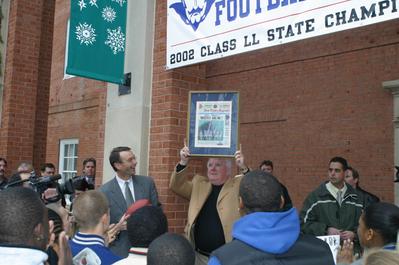 ‘Westies’ are #1
By Ned Griffen (NH Register 12/11/02)- Class S champion Ansonia (13-0), the state’s only other unbeaten team, placed fifth while Class SS champion Hillhouse (11-2) finished 10th.
Starting on Thanksgiving Day, the Westies knocked off one unbeaten team after the next. It began with a 29-14 win over Fairfield Prep, followed by a 47-26 Class L semifinal win over Norwich Free Academy on Dec. 3.
The Blue Devils ended their perfect season their win over FCIAC champion Greenwich.

Phil Banks scored on a 50-yard run with 38 seconds to play to give West Haven a 20-13 win in the Class LL championship game Saturday at Kennedy Stadium in Bridgeport.

Banks scored on a 4th-and-1 play when it looked as though the game was destined for overtime.

Tom DeMorro scored two touchdowns on receptions from quarterback Derek Amato for West Haven (12-0). DeMorro caught passes of 27 and 10 yards. Greenwich got a 30-yard touchdown pass from Jim Cabrera to Kevin Longo to tie the game in the fourth quarter. Longo opened the scoring in the first quarter on a 5-yard run.

West Haven scored on nine of its 12 possessions in the game on the way to a 47-26 win over Norwich Free Academy at Strong Field Tuesday night.

Phil Banks and Maurice Little both scored a pair of rushing touchdowns and Tom DeMorro rushed for one score and caught a touchdown pass for the Blue Devils.

West Haven, the Class LL's top seed, improved to 11-0 on the season and will face Greenwich in the final at Kennedy Stadium at Bridgeport on Saturday at 2 p.m.

NFA finished the season at 11-1. The Wildcats got a pair of touchdown passes from J.J. Justice, who also ran for another.