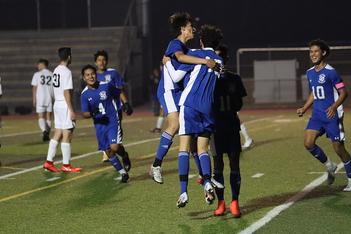 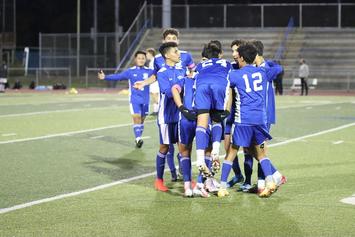 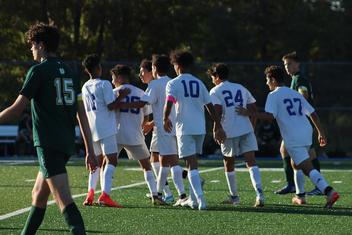 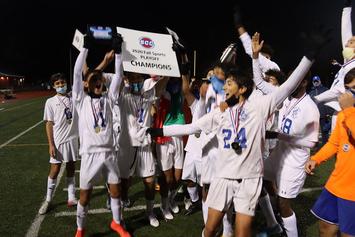 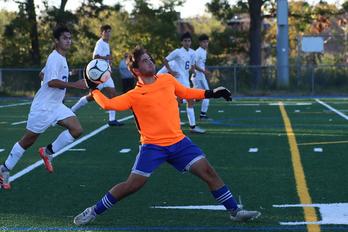 Fit to be Tied
Westies and NDWH play to 2-2 draw in opener
By MIKE MADERA
Westie Blue
(October 2, 2020) - The West Haven boys soccer team has had plenty of time to get ready for a different season and a new normal. If there were any questions regarding any team being ready to play, those questions were answered in a hurry.

West Haven celebrates a goal against Notre Dame, October 2, 2020. Photo courtesy of Todd Dandelske.
Thrown right into a rivalry contest to start the season, West Haven traveled to Veterans Field Friday afternoon to open the season against rival Notre Dame. The wait was worth it for both teams as a highly competitive contest ended in a 2-2 tie.
For the Westies, the outcome may not have been as desired as the Westies jumped out to a 2-0 lead. Goals by senior Derick Meza and junior Brian Rivadera had West Haven on top, but the Green Knight came back.
Joe Lakaj cut the Notre Dame deficit in half, and with approximately four minutes remaining, Connor Naumann scored on a penalty kick to even the game at two.

In the Win Column
Barragan scores 3 times in 4-1 win over North Haven
By MIKE MADERA
Westie Blue
(October 9, 2020) - The West Haven boys soccer team needed to wait a week between games to get on the field, but that wait was well worth it.
Led by a pair of seniors on the offensive side, West Haven posted a 4-1 victory over North Haven Friday evening at Ken Strong Stadium to improve to 1-0-1 on the year.Aldo Barragan led West Haven with three goals, while fellow senior Derick Meza scored once in the win.

West Haven in earlier season action. Photo courtesy of Todd Dandelske.
Despite the fact the Westies held a 22-15 advantage in shots, West Haven could only manage a goal by Aldo Barragan at the 11:03 mark of the first half. Law answered with goals by Lex Edwards (18:50) and Fillipe Mourao (24:28) to take a 2-1 lead it never relinquished.
Brian Carew finished with 11 saves in the loss for West Haven.

Westies roll past Platt Tech
Barragan scores 4 times in 6-1 win
By MIKE MADERA
Westie Blue
(October 14, 2020) - The West Haven boys soccer team improved to 2-1-1 with a 6-1 victory over Platt Tech in West Haven Wednesday afternoon.
Senior Aldo Barragan led the way for West Haven with four goals and an assist, while junior Brian Rivadera and junior Donaldo Yanez each scored once. Sebastian Novoa each Mubarak Issa each had assists in the win.

Anthony Vendrella (21) against Platt Tech, October 15, 2020. Photo courtesy of Todd Dandelske.
West Haven held a 25-7 shot advantage in the contest. John McLaughlin finished with six saves in the win.
The Westies scored early and often in the contest as Barragan scored 8 minutes, 12 seconds into the game and Rivadera followed 3:14 later. West Haven added three more goals to take a 5-0 lead to the half.
Barragan scored at 27:04 and followed 9:24 later with his third tally of the game, before Yanez scored 1:08 later for a 5-0 West Haven lead.
Barragan scored West Haven’s lone goal of the second half 11:52 in.

All Tied Up
Westies and Foran play to 1-1 draw
By MIKE MADERA
Westie Blue
(October 19, 2020) - The West Haven boys soccer team traveled to Milford Monday afternoon and came away with a 1-1 draw against Foran. With the decision, West Haven moved to 2-1-2 on the year.

The Westies held a 10-6 shot advantage in the contest, but could only manage one goal as Sebastian Novoa had the lone West Haven tally in the contest. Brian Carew finished with four saves for West Haven.

Westies roll past Amity
Barragan nets 3 in 7-2 win
By MIKE MADERA
Westie Blue
(October 23, 2020) - The West Haven boys soccer team improved to 3-1-2 with a resounding 7-2 victory over Amity Friday evening at Ken Strong Stadium in West Haven.
Aldo Barragan led the Westies with three goals, Sebastian Novoa scored twice, and Derick Meza and Donaldo Yanez each scored once. John McLaughlin made seven saves in the victory for the Westies.
The Westies led 4-0 at the half and never looked back. Meza got things going for West Haven 3:06 into the contest, Barragan scored the first of his three goals 9:08 later, and Novoa scored 3:36 later for a 3-0 advantage. When Barragan scored with 7:55 remaining in the first half, West Haven led 4-0.Leading 4-1, Barragan scored his third goal at the 59:36 mark, and Novoa added his second at 65:05. Yanez capped the scoring at the 77:16 mark.

With the victory, the Westies are now 3-0-1 in their last four games.
Seniors Derick Meza and Aldo Barragan scored in the first half, with junior Alan Hernandez assisting on both tallies.

Junior Brian Carew made eight saves in the shutout win for West Haven as the Westies held a 22-10 shot advantage in the game.

Zack Benson and Matt Tobin each made four saves for the Green Knights. 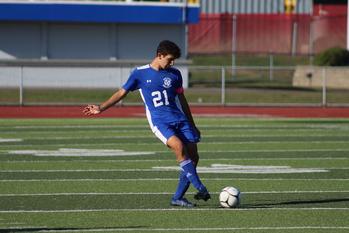 WH rolls past Platt Tech
Westies win third in row
By MIKE MADERA
Westie Blue
(October 30, 2020) - The West Haven boys soccer team improved to 5-1-2 with its third straight victory Friday afternoon, a 6-0 decision over Platt Tech.
The Westies dominated the contest from start to finish, holding a 24-4 shot advantage and leading 3-0 at the half. Senior Aldo Barragan led the offense with two goals, while senior Derick Meza, and juniors Brian Rivadera and Donaldo Yanez each had a goal and an assist.
Meza got West Haven on the board quickly, scoring off an assist from senior Sebastian Novoa 16 minutes, 38 seconds into the contest. Rivadera increased the lead to 2-0 at the 23:21 mark with an unassisted tally, before Yanez closed the first half scoring off an assist from Rivadera at the 34:48 mark.
The Westies put the game away with three more goals in the second half. Barragan scored the first two as his initial goal at the 48:32 mark was assisted by Yanez, and his second tally 4:05 later was unassisted.
Junior Murtaza Amjad scored the final goal of the contest off an assist from Meza with 4:24 to go.
West Haven received a solid defensive performance all around and junior Holden Axelrod picked up the shutout with three saves in goal.

WH blanks North Haven
Barragan scores 3 in 7-0 victory
By MIKE MADERA
Westie Blue
(November 3, 2020) - The West Haven boys soccer team improved to 6-1-2 with its fourth straight victory, a 7-0 decision at North Haven Tuesday evening. The shutout was West Haven’s third in a row as the Westies have outscored their opponents 15-0 in that time frame.
West Haven dominated the game from start to finish with a 31-5 shot advantage. John McLaughlin needed to make just three saves in posting the shutout.
Aldo Barragan led West Haven on the offensive side with three goals and an assist. Five different players scored for the Westies in the victory.
The Westies led 3-0 at the half and cruised from that point on. Barragan gave West Haven a 1-0 lead 12 minutes, 28 seconds into the contest off an assist from Derick Meza.
The goal would stand until the Westies struck quickly in the final seven minutes of the half. Brian Rivadera added an unassisted tally at 32:16 and Barragan scored off an assist from Alan Hernandez at 32:26.The Westies needed just 2:54 of the second half to take a 4-0 lead when Sebastian Novoa scored off an assist from Barragan. Barragan increased the margin to 5-0 off an assist from Anthony Vendrella at 64:04, and Sebastian Navarro and Meza added unassisted tallies in the final eight minutes for the 7-0 final.

Five in a Row
WH improves to 7-1-2 with 3-0 win over Law
By MIKE MADERA
Westie Blue
(November 6, 2020) - The West Haven boys soccer team closed out the regular season with its fifth straight victory, a 3-0 decision over Jonathan Law Friday evening at Ken Strong Stadium in West Haven. With the victory, West Haven closed the regular season with a 7-1-2 record.
Five different players were in the scoring column for the Westies, and Brian Carew made a pair of saves in the shutout win. West Haven held a 12-5 shot advantage in the game.
Derick Meza gave West Haven a 1-0 lead with 11 minutes, 12 seconds remaining in the first half, before Alan Hernandez increased the lead to 2-0 off an assist from Aldo Barragan 4:27 later.The Westies scored the lone goal of the second half when Sebastian Novoa scored off an assist from Brian Rivadera with 13:34 remaining in the contest.

West Haven celebrates a goal against Shelton, November 9, 2020. Photo courtesy of Todd Dandelske.
Aldo Barragan scored twice for the Westies, while freshman Rafael Gazcon scored on a penalty kick in the victory. The win was West Haven’s sixth in a row and helped improved the team’s record to 8-1-2.

West Haven held a 15-4 shot advantage in the contest with Brian Carew making two saves.
After a scoreless first half, Barragan gave West Haven a 1-0 lead off an assist from Brian Rivadera 5 minutes, 24 seconds into the second half. Shelton evened the game less than three minutes later, but the Westies had an answer.
Barragan broke the tie with his second goal of the contest at 61:31 off an assist from Derick Meza, before West Haven iced the contest 8:32 later. Gazcon scored his first varsity goal by way of the penalty kick to give West Haven a 3-1 advantage at 70:03. ​

Barragan leads Westies to SCC Final
Senior scores 3 times in last-second victory
By MIKE MADERA
Westie Blue
(November 11, 2020) - It is no secret the West Haven boys soccer team is a well-rounded squad. The team plays defense. It gets solid goalkeeping.
Just as important, the Westies can score. Just ask senior Aldo Barragan.
Trailing by a pair of goals, the Westies turned to their senior sniper and Barragan did not disappoint. Scoring three times in the second half, including the final tally with two seconds remaining, Barragan helped lift third-seeded West Haven to a 3-2 Southern Connecticut Conference Division C semifinal victory over second-seeded Jonathan Law in Milford Wednesday evening.
With the victory, West Haven advanced to Friday’s final against Foran.
West Haven trailed 1-0 at the half as Law’s Aidan King scored with 6:06 left in the first half. Law extended the margin to 2-0 when Fillipe Mourao scored 6:57 into the second half.
Barragan then took over. The senior responded with a goal 4:40 later off an assist from Sebastian Novoa to get West Haven within 2-1, before he needed just 3:50 to even the contest with an unassisted goal.
With all the momentum on West Haven’s side, Barragan capped the rally with the last-second tally.
Senior Jovan Loja had a solid game for the Westies, locking down the midfield for West Haven.West Haven held a 15-7 shot advantage in the contest, with John McLaughlin making three saves in the victory.

SCC Division C Champs
Barragan, Meza score in title-clinching victory
By MIKE MADERA
Westie Blue
(November 13, 2020) - The 2020 fall season has been anything but normal. For the West Haven boy soccer team, it has been magical.
Since playing to a draw with Foran earlier in the season, the third-seeded Westies closed the campaign with eight straight victories, including a 2-1 victory over top-seeded Foran in the Southern Connecticut Conference Division C final at Foran High Friday afternoon.

West Haven celebrates its SCC Division C championship with a 2-1 win over Foran, November 13, 2020. Photo courtesy of Todd Dandelske.
The victory was West Haven’s tenth of the shortened season and allowed the team to take home its first SCC title. West Haven (10-1-2) closed out the season by outscoring its opponents 31-6 in the final eight games.
In an intense game from the start, West Haven took a 1-0 lead when SCC Division C tournament most valuable player Aldo Barragan scored an unassisted goal with 11 minutes, 41 seconds remaining in the half.
The competitive contest saw West Haven hold a 13-8 shot advantage, but Foran evened the game when Ben Cogan scored on a penalty kick with 52 seconds remaining in the first half.
The game would go back and forth until West Haven took the lead for good with 18:16 remaining as Derick Meza scored off an assist from Sebastian Navarro.

The West Haven defense and goalkeeper Brian Carew did the rest as Carew finished with three saves and the Westies prevailed for the title.

​Read more about the title-clinching victory at GameTimeCT.