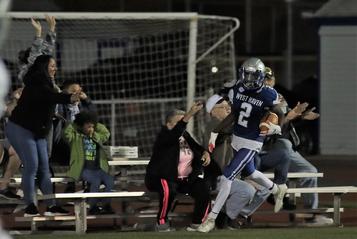 Flying High
Westies open season with 52-16 win over Harding
By MIKE MADERA
Westie Blue
(September 10, 2021) - After a year off, the West Haven football team was certainly excited to get back on the field. That excitement showed in a hurry in the season opener Friday evening.
Looking to get off to a quick start, the Westies did exactly that and cruised to a 52-16 victory over Harding at Ken Strong Stadium in West Haven.
The Westies turned to a variety of players and found different ways to score in the first game since teams were allowed to play meaningful games on the field.

Tamayo Ferreira (2) scores against Harding, September 10, 2021. Photo courtesy of Todd Dandelske.
West Haven’s first score of the season came on a 10-yard run by senior Amir Nakome and was followed by the extra point from sophomore Raul Sanchez for a 7-0 lead. A safety extended the lead to 9-0, before West Haven’s passing game got going.
Junior Preston Denno found senior Chauncey Evans for a 45-yard scoring strike and a 15-0 lead. Junior Deven Robinson helped increase the lead to 22-0 with a 39-yard touchdown run, before the special teams got in on the fun.
Senior Tamayo Ferreira put West Haven on top 29-0 with a 39-yard punt return for a touchdown. When Nakome scored on his second touchdown run of the night, this one from 61 yards, the Westies were up 36-0.After Harding got within 36-8 on a 20-yard touchdown run, junior Trevor Tompkins scored on a 30-yard run for a 44-8 lead. West Haven’s final points came when freshman Nick Conlon hooked up with Ferreira for a 28-yard score.

Senior Jamaine Galloway took in the two-point conversion for the 52-16 final.

Tough Loss
Westies fall to Hamden 13-6 in overtime
By MIKE MADERA
Westie Blue
(September 17, 2021) - The West Haven football team fell to 1-1 with a 13-6 overtime loss in Hamden Friday night. Unable to get going on offense and struggling with special teams, the Westies suffered their first loss of the season.
West Haven’s lone touchdown came late in the second quarter when junior Avian Evans fumbled on the Hamden 3-yard line, but junior quarterback Preston Denno picked up the loose ball and scored. The extra point was blocked, which proved to be a key point in the game.
Hamden tied the contest with just under 8 minutes remaining in the third quarter. The Green Dragons knotted the contest at 6 when Camyran Winder raced 81 yards with an interception return for a score.
The loss overshadowed what was a terrific effort by West Haven’s defense, including stopping Hamden inside the West Haven 20 in the final seconds of the opening half.
Unfortunately for the Westies, they had punts blocked, an extra point blocked, and could not convert other than the one score when in Hamden territory.