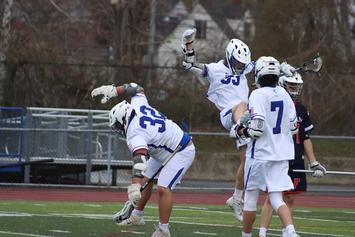 ​Westies top Lyman Hall
WH wins season-opener
By MIKE MADERA
Westie Blue
(April 10, 2021)  - The West Haven boys lacrosse team opened the 2021 season with a 12-9 victory over Lyman Hall in Wallingford Saturday afternoon. After struggling at the start, the Westies rallied behind the play of Conner Fowler and Tyler Moscato to post the season-opening victory.

“It has been 685 Days since our last game,” West Haven coach Patrick Reed said. “It was a long layoff and there was a lot of rust that had to get knocked off.
“We had a really tough time shooting in the first half.  We were hitting their goalie a lot on a lot of slam dunk shots. We were very wound up as a team. It seemed like some early jitters were getting in the way. We came together at the half and instead of yelling, I told them a funny story to take the edge off. They all laughed and then they exploded like I knew they could. We outscored them 7-2. Obviously, Tyler Moscato had a great game, but our whole attack was great. Conner Fowler was automatic when he caught the ball inside, and Mike Kelly had a rough shooting day early, but handed out four assists to go along with his goal.”

West Haven celebrates against Lyman Hall, April 10, 2021. Photo courtesy of Todd Dandelske.
Tyler Moscato led the West Haven offense with five goals and two assists, and Conner Fowler had a solid day with four goals and three assists. Michael Kelly finished with one goal and four assists, while Ethan Phelan also scored. Kevin Gardner, Khai Outhavong, and Nico Bruneau each had one assist apiece.
The Westies trailed by two goals at the half, but rebounded nicely in the second half, scoring seven of the nine goals.
Senior Anthony Campagnuolo finished with 25 saves in the win, including 14 in the second half. Campagnuolo made 10 saves in the third quarter.
“Defensively, Anthony Campagnuolo had a great game,” Reed said. “He has huge shoes to fill and he played the game of his life.  He made a huge save in the third when we missed a slide and he had to stop a guy one on none.  I actually said there's a goal, but he stopped it, hit an outlet pass and had it in their goal in less than 20 seconds.  That really put their guys on the ropes.”
“Nico Bruneau had a great game at defense with four caused turnovers and a team leading seven ground balls on the day. He was a huge disruptive force for our team.”

Westies run past Foran
Moscato, Cayo, Kelly lead WH to 7-4 win
By MIKE MADERA
Westie Blue
(April 12, 2021)  - After a comeback victory over Lyman Hall to start the season, the West Haven boys lacrosse team was looking to get off to a quick start in the home opener against Foran Monday evening.
Behind two goals from Tyler Moscato, and a goal and an assist apiece from Michael Kelly and Amir Cayo, West Haven topped Foran 7-4 at Ken Strong Stadium in West Haven. With the victory, West Haven improved to 2-0 on the year.

West Haven celebrates a goal against Foran, April 12, 2021. Photo courtesy of Todd Dandelske.
The Westies took control of the game in the third quarter when they broke open a 3-2 lead with three goals. Cayo gave the Westies a 4-2 lead with 11:27 left in the third off an assist from Kelly, before Cayo set up Ethan Phelan for a 5-2 advantage with 6:54 left in the third. When Conner Fowler scored 4:02 later, West Haven had a 6-2 lead.

“It was another ugly win today,” West Haven coach Patrick Reed said. “We played very close to Foran. They are a young team, but very skilled and well-coached. They played a great first half and a broken play let us go into the half up by one. The third quarter was a again our best.  Chomps (Anthony Campagnuolo) came up with a couple of huge saves and our defense played in control and shut them out for the third. We didn't take any penalties in the third, but we were able to capitalize on two man-up plays to build a little cushion.”
Moscato scored his second of the game with 3:53 remaining in the game for a 7-2 lead. Foran scored twice in the final 1:58, but never got closer.
West Haven led from the start, taking a 2-0 lead as Moscato scored the first goal of the contest with 4:51 left in the opening quarter, and Kevin Gardner increased the lead to 2-0 just 2:44 later. Leading 2-1, Kelly scored with 8:21 left in the first half for a 3-1 lead.

Fowler, Moscato lead WH
WH defeats Law 15-5 to move to 4-2
By MIKE MADERA
Westie Blue
(April 28, 2021)  - The West Haven boys lacrosse team snapped a two-game losing streak and improved to 4-2 with a 15-5 victory over Jonathan Law Wednesday evening in Milford.
Conner Fowler led the Westies with six goals and one assist, Tyler Moscato had two goals and seven assists, while Nate Smith had two goals and two assists, and Charlie Miller and Gio Talamelli each had a goal and an assist.
The Westies held a 6-0 lead after one quarter and never looked back as Charlie Miller got things going off an assist from Mike Kelly with 9:44 left in the quarter. Just 1:23 later, it was 2-0 on an unassisted goal by Moscato, before Nate Smith scored off an assist from Miller three minutes later.
Smith then assisted on Moscato’s second goal for a 4-0 advantage, before Fowler scored off an assist from Moscato with 2:15 remaining in the quarter. Talamelli wrapped up the first quarter scoring off an assist from Moscato with 1:02 remaining.
Law scored the first two goals of the second quarter and got within 7-4 after Smith had scored for the Westies.
Goals by Fowler and Joe D’Aurio in the third quarter extended the lead to 9-4, before Fowler scored twice, the first assisted by Moscato and the second by Talamelli, for an 11—5 advantage.

Fowler scored the first two goals of the fourth quarter, both assisted by Moscato, before Ethan Phelan and Kevin Gardner rounded out the scoring.

West Haven against Lyman Hall, May 3, 2021. Photo courtesy of Todd Dandelske.
Tyler Moscato led the Westies with three goals and two assists, while Conner Fowler had a goal and three assists in the loss. Anthony Campagnuolo made 18 saves for West Haven.
Lyman Hall got off to a quick 2-0 lead before Charlie Miller scored off an assist from Mike Kelly to cut the deficit in half. Moscato got West Haven within 3-2 and Fowler evened the contest with 8:53 left in the half off an assist from Moscato. 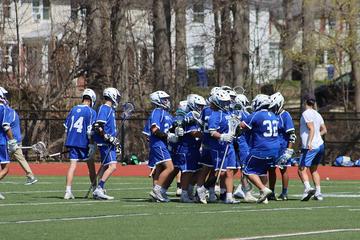 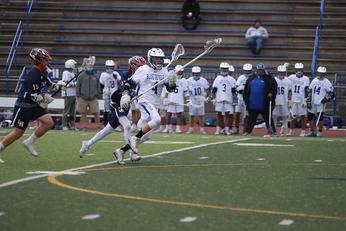 ​Westies top Foran
Phalen, Fowler, Moscato lead WH
By MIKE MADERA
Westie Blue
(May 15, 2021)  - The West Haven boys lacrosse team improved to 8-4 with its second straight victory as the Westies topped Foran 9-5 on the road Saturday morning.
The Westies had a 30-27 shot advantage in the contest and were led by Ethan Phalen with three goals. Connor Fowler and Tyler Moscato each scored twice, while Amir Cayo and Charlie Miller added one goal apiece.
Mike Kelly and Miller each had a pair of assists, while Moscato, Cayo, and Nate Smith had one assist each. Anthony Campagnuolo made nine saves in the win for West Haven.

West Haven led 4-2 at the half and limited Foran to three goals in the second half. Chris Adkins scored twice, and Joey Honcz had three assists for the Lions. 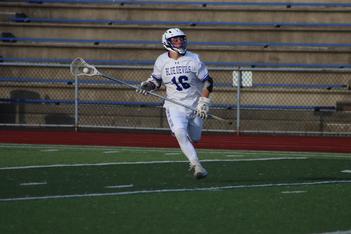