Westies run past Stamford
Abuhatab, Carrano, Howard lead way in opener
By MIKE MADERA
Westie Blue
(December 16, 2021) - The West Haven girls basketball team opened the season in impressive fashion with a 63-49 victory over eighth-ranked Stamford at West Haven High Thursday evening.
The Westies rode the scoring of juniors Amani Abuhatab, Kassidy Carrano and Dealyce Howard as the trio combined for 57 of the 63 points. Abuhatab led the way with 24 points and 15 rebounds, Carrano had 19 points, and Howard added 14 in the win.
While the Westies struggled from the free throw line, hitting just over 50% (16-30), they were solid from the outside with seven 3-pointers. Carrano led the way with three, while Abuhatab and Howard each drained a pair.
West Haven held Stamford to nine points in the opening quarter and took a 6-point lead as Abuhatab had eight points and Carrano added five.
The Westies extended the margin to 14 points at the half, taking a 37-23 lead as the trio of Abuhatab, Carrano and Howard got going. Howard drained a pair of 3-pointers and had eight points in the quarter, Abuhatab had six points and Carrano five.
Stamford cut the deficit to 12 in the third quarter, before West Haven connected on 12-of-16 free throws in the fourth quarter to ice the game.
The Westies connected on just two field goals in the final quarter, one apiece from Abuhatab and Carrano, as Stamford looked to get back in the game by sending the Westies to the line.

Too Much
Westies cruise past Lauralton Hall
By MIKE MADERA
Westie Blue
(December 17, 2021) - If opponents are going to slow down the West Haven girls basketball team, they will need to find a way to hold down the team’s plethora of weapons. In the season opener against Stamford, it was the trio of Amani Abuhatab, Kassidy Carrano and Dealyce Howard.
Lauralton Hall found out the Westies are more than the feared trio. When Isabella Fiorillo and Ella Morgan are added to the mix, the Westies are almost unstoppable.
Behind 29 points from Carrano, 16 from Abuhatab, 11 from Fiorillo and seven from Morgan, the Westies cruised to a 72-40 victory over Lauralton Hall and improved to 2-0 Friday evening at West Haven High.
Abuhatab was dominant with 13 rebounds, 11 steals and 8 assists, while Carrano added 9 rebounds, 7 assists, and 3 steals, and Morgan pulled down 8 rebounds. Fiorillo also had 3 assists and 2 steals.
Carrano was the story of the game early for the Westies as she helped the Westies to a 24-10 lead with 13 points in the opening quarter, including a big 3-pointer. Morgan added six points in the first eight minutes, including a 3-pointer as well.
Abuhatab picked up the Westies in the second quarter as the Westies were held to just nine points. The West Haven junior had six of those points as West Haven led 33-21.
Carrano and Abuhatab then sealed the win in the third quarter, combining for 16 of the team’s 17 points, on the way to a 50-27 advantage. Carrano hit on three field goals, and also drained a 3-pointer, while Abuhatab also hit on three field goals.
Fiorillo nailed three from long range in the final quarter and Carrano hit two 3-pointers as the Westies pulled away.

In Control
10 players in scoring column in win over Bassick
By MIKE MADERA
Westie Blue
(December 23, 2021) - The West Haven girls basketball team improved to 3-0 with a resounding 68-12 victory over Bassick Thursday afternoon at West Haven High. Ten different players were in the scoring column and three were in double digits for coach Jessica Moriarty’s team.
Kassidy Carrano led the Westies with 17 points, Amani Abuhatab had 14 points, and Dealyce Howard added 10 points. Isabella Fiorillo scored nine points, while Daniela Campillo scored her first varsity points.
The Westies jumped out of the gates quickly and scored 18 points in the opening quarter, led by Abuhatab with 9.
West Haven added 22 more points in the second quarter as seven players got in the scoring column. Campillo drained her first varsity basket, Fiorillo scored four points, while Carrano scored six and Howard added five.

The Westies led 49-9 in the middle of the third quarter in a dominant effort. West Haven hit on 24 field goals and five 3-pointers in the game, but only hit on 5-of-12 free throws.

Four Straight
Westies thump Cheshire 60-29
By MIKE MADERA
Westie Blue
(January 10, 2022) - After more than a two-week layoff, the West Haven girls basketball team was eager to get on the court. The Westies wasted no time continuing their winning way.
Behind a solid defensive effort and a balanced scoring attack, West Haven improved to 4-0 with a 60-29 victory at Cheshire Monday evening.
The Westies were dangerous from the outside, connecting on nine 3 -pointers, with Kassidy Carrano and Dealyce Howard leading the way with three apiece.
Carrano finished the contest with 17 points, Howard had 12, and Amani Abuhatab finished with 11. Tenique Gates and Isabella Fiorillo each scored eight points, while Ella Morgan rounded out the scoring with two points.

Abuhatab added 15 rebounds, five steals, three blocks and three assists, Howard had five assists, four steals and four rebounds, and Carrano finished with three rebounds, three steals and two assists.
The Westies jumped out of the gates quickly with 16 first quarter points, including four apiece from Abuhatab, Howard and Gates.
West Haven exploded for 24 points in the second quarter alone and never looked back as Fiorillo scored eight and Abuhatab had seven. Six different players scored in the quarter.

Carrano scored eight of her team’s ten points in the third quarter as West Haven rolled to its fourth victory of the season.

Westies top Shelton
Westies too much in 66-29 win
By MIKE MADERA
Westie Blue
(January 12, 2022) - If any team is going to beat West Haven, it will have to find a way to stop the trio of Amani Abuhatab, Kassidy Carrano and Dealyce Howard. Wednesday was not the night.
The trio combined to score 49 points in a 66-29 victory over Shelton at West Haven High. Carrano led the way with 21 points, Abuhatab scored 16 and Howard had 12 as the Westies improved to 5-0.
While the offense was clicking, the defense was just as good, allowing under 30 points. The defensive efforts were more than enough as the Westies scored 38 points in the first half alone.
The trio of Abuhatab, Carrano and Howard got going early, combining for 21 points in the first eight minutes. Carrano led the way with nine points, Howard had eight, and Abuhatab four.
Six players combined to score 17 points in the second quarter, with Abuhatab knocking in five and Carrano four.
The Westies scored 17 points in the final quarter as Carrano scored six and Abuhatab added four.

Six Straight
Abuhatab, Carrano, Fiorillo lead way over East Haven
By MIKE MADERA
Westie Blue
(January 15, 2022) - The West Haven girls basketball team won its sixth straight contest to open the season with a 49-32 victory over East Haven at West Haven High Saturday afternoon.
Amani Abuhatab led the way with 16 points, 14 rebounds, and two steals, while Kassidy Carrano added 12 points, 5 rebounds, and 5 assists. Isabella Fiorillo scored 10 points, Dealyce Howard added 8 points, and Mya Flemming and Ella Morgan combined for 11 rebounds.
The Westies led 10-7 after one quarter and 26-12 at the half. Leading 32-21, West Haven closed the game on a 17-11 run.
Abuhatab scored five points in the opening quarter and Fiorillo had three. Abuhatab was at it again, leading the offense with eight points in the second quarter. Carrano scored five.

Fiorillo was the key in the final eight minutes with seven points, while Carrano and Howard each had four.

Westies remain Perfect
Abuhatab's late free throws propel WH over NH
By MIKE MADERA
Westie Blue
(January 18, 2022) - For the better part of the beginning of the season, it has been well noted to stop the West Haven girls basketball team, the trio of Amani Abuhatab, Kassidy Carrano and Dealyce Howard would need to be contained.
While North Haven did so in the final eight minutes, it was the last 10.2 seconds of the game which hurt the home team. Draining a pair of free throws in the final 11 seconds, Abuhatab capped her stellar night to lead West Haven to a 51-50 victory at North Haven Tuesday evening.
Abuhatab finished the game with 14 points, 10 rebounds, 10 steals, and seven assists as the Westies remained undefeated at 7-0.
Carrano also played well with 10 points and 10 rebounds, Howard had 10 points, and Tenique Gates finished with nine points.
West Haven led by two points after one quarter and 26-20 at the half, before increasing the margin to 39-29 after three.
North Haven broke free for 21 fourth quarter points and the 21-7 run had West Haven in a 50-49 hole, before Abuhatab’s heroics.
West Haven connected on just three field goals in the final eight minutes, two coming from Abuhatab and the other from Sonai Maye.

The Westies used six points from Howard in the second quarter and five from Gates to take a six-point lead. Isabella Fiorillo drained a pair of buckets in the third, and Carrano added four points to increase the lead to 10.

Westies roll past Harding
11 players score in 66-20 victory
By MIKE MADERA
Westie Blue
(January 19, 2022) - The West Haven girls basketball team was well aware of what was ahead in a showdown with Sacred Heart Academy Friday evening. The key was to not look ahead.
Outscoring Harding by 21 points in the opening quarter, the Westies cruised to a 66-20 victory Wednesday evening in Bridgeport. With the victory, West Haven improved to 8-0 on the year.
Eleven players were in the scoring column with Amani Abuhatab leading the way with 18 points. Kassidy Carrano scored 14, Ella Morgan had eight, and Mya Flemming and Ava Murphy each scored five in the win.

Carrano led a 22-1 first quarter run with a pair of 3-pointers and 10 points, before a 16-2 second quarter run was fueled by Flemming, Morgan and Sonai Maye with four points apiece. Abuhatab led a 19-5 run in the third quarter with 8 points.

Westies fall to SHA
Cold start leads to 61-51 loss
By MIKE MADERA
Westie Blue
(January 21, 2022) - It was set up as the game of the year thus far. Unfortunately for the Westies, they did not get going until the second half.
Watching as Sacred Heart Academy scored the first 11 points of the game, West Haven never recovered in a 61-51 loss in front of a packed crowd at West Haven High Friday evening.
The Westies (8-1) finally got going in the second half, cutting the deficit to seven on a bucket and free throw by Amani Abuhatab, and seven again on a free throw by Kassidy Carrano, but the Westies never got closer.
West Haven was cold in the first quarter, missing numerous inside shots. The key, however, was West Haven was in early foul trouble as two key players missed early time. Carrano had two fouls just 1:20 into the game and Abuhatab had her first two minutes in.
Sacred Heart led 19-5 after one quarter, with four points coming from West Haven’s Abuhatab. The Westies got within 32-16 on a pair of free throws by Carrano just before the half.
Trailing by 17 to start the fourth quarter, a bucket and free throw by Ava Murphy got West Haven within 16, before a 6-0 run on baskets by Abuhatab, Carrano, and Dealyce Howard had the Westies within 55-44.
Sacred Heart hit six of eight free throws down the stretch to seal the victory. 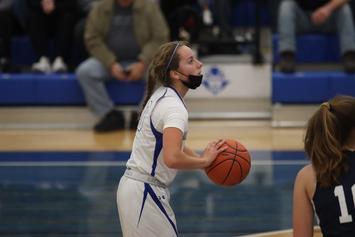 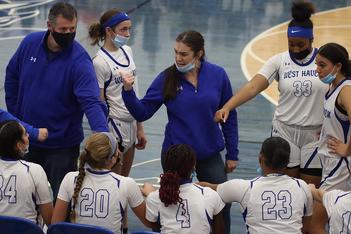 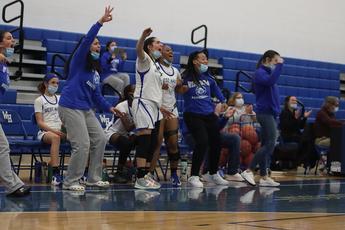 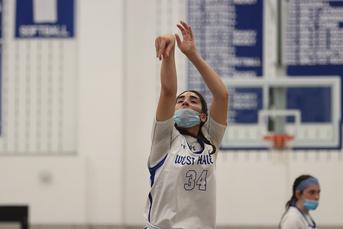