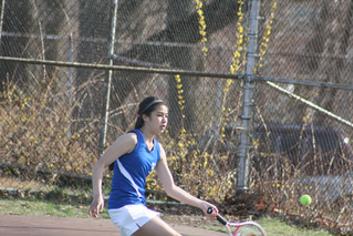 Westies fall to Sheehan
WH drops to 0-9 with loss to Titans
By MIKE MADERA
Westie Blue
(April 29, 2014)- The West Haven girls' tennis team was hoping to pick up its first victory of the year Tuesday afternoon in Wallingford. Instead, the Westies dropped their ninth straight decision to start the season with a 6-1 loss to the Titans.
Top-seeded Rania Abu-Sitteh fell in singles action to Katie Read 6-1, 7-5, second-seeded Cindy Nguyen fell to Julia Franzik 6-1, 6-1 and fourth-seeded Lhamo Dolma fell 6-1, 6-2 against Ashley Addona. Third-seeded Shannon Card picked up the lone victory over Tessa Arsenault 6-2, 3-4 in a match stopped by weather default.
In doubles play, top-seeded Talon Yahaya and Miya Bidon fell to Riley Mayne and Nicki Petit 6-1, 6-4, second-seeded Cindy Li and Katerina Mazzacane lost 6-1, 6-2 against Krithika Chagari and Amy Caplan. Third-seeded Evelyn Fabian and Elise Abu-Sitteh lost 7-5, 6-0 against Sharon Gudzon and Cassidy Duffany.

Mercy too much for WH
Westies fall to 0-7 with loss to Tigers
By MIKE MADERA
Westie Blue
(April 23, 2014)- The West Haven girls' tennis team continues to search for its first team victory of the season. Hosting Mercy on Wednesday afternoon, the Westies fell to the Tigers 7-0.
In singles play, top-seeded Rania Abu-Sitteh fell to Natalie Harackiewicz, 6-1, 6-0, second-seeded Cindy Nguyen lost a 6-3, 6-1 decision to Genevieve Denault and third-seeded Shannon Card fell to Maria Walton by scores of 6-0 and 6-0. Lhamo Dolma fell in the fourth slot to Presley Termini 6-4, 6-4.
In doubles action, top-seeded Talon Yahaya and Nurul Sauffian lost 6-4, 7-6 (7-2) against Meghan Tomassetti and Sumner Klotzbach, while second-seeded Marla Gagne and Stefania Vendrella fell to Molly Garcia and Taylor Albert 7-5, 6-1. Third-seeded Khari Reynado and Maggie Yeh lost to Sabrina Streeter and Katherine Hanley 6-3, 6-1.

Slow Start
Westies fall to Hamden in season opener
By MIKE MADERA
Westie Blue
(April 9, 2014) – The West Haven girls' tennis team traveled to Hamden in its season opener and came out on the short end as Hamden posted a 6-1 victory.
The Westies battled and played tough in each match, but it was Hamden which continually game up with the big shots in the victory.
West Haven's only victory came in doubles play as Talon Yahaya and Nurul Sauffian defeated Carly Semack and Sophie Coassis 6-4, 6-3.
In other doubles action, Marla Gagne and Kharl Reynado fell to Tashanta Gray and Kelsea Wildman 6-4, 6-3 and Stefania Vendrella and Miya Bidon lost 6-3, 6-1.
In singles play, top-seeded Rania Abu-Sitteh fell to Vidhya Maran 6-0, 6-1, second-seeded Cindy Nguyen lost to Katie Esposito 6-0, 6-1 and third-seeded Shannon Card was defeated by Mia Bonadies 6-2, 6-3. Lhamo Dolma fell in the fourth slot to Sarah Skeeles 6-1, 6-0.

Looking Up
West Haven ready for 2014
By MIKE MADERA
Westie Blue
(April 7, 2014) – Coming off a season in which the team failed to win a match, the West Haven girls' tennis team has put it all in the rearview mirror. With more experience and plenty of talent, the 2014 Westies are ready to play.
"The team goal this year is to work together and push each other," West Haven coach Kara Kaczynski said. "We are ready to beat teams that we lost to last year. We have more experience now and confidence in our skills.
"We are an athletic team and most importantly, the girls are committed and dedicated to me and their teammates to have a successful and winning season this year."
Leading the way for West Haven are senior captains Marla Gagne and Shannon Card. Gagne will play as part of the second-seeded doubles team, while Card will play either second or third seed on the singles side.
"Both are fantastic leaders," Kaczynski said of her captains. "Marla has improved in all areas of her game. Her volleys look great. Shannon has become more confident in her ability and her ground strokes look great as well."
Juniors Talon Yahaya, Nurul Sauffian, Cindy Nguyen, Rania Abu-Sitteh and Lhamo Dolma will all play a big part in the success of the 2014 team. Nguyen, Abu-Sitteh and Lhamo will all play singles.
"They all played singles last year, so they have experience under their belts," Kaczynski said. "They have been working hard and they are ready to win this year."
West Haven opens it season Wednesday, April 9 at 3:45 p.m. in Hamden. 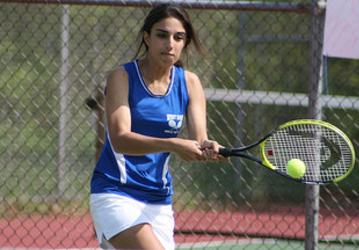 Westies lose to Lyman Hall
West Haven falls in season finale
By MIKE MADERA
Westie Blue
(May 27, 2014) - The West Haven girls' tennis team fell in the season finale with a 5-2 loss to Lyman Hall in Wallingford.
Despite victories by Cindy Nguyen and Rania Abu-Sitteh in singles play, the Westies dropped a 5-2 decision, falling to 0-17 as a team.

Rania Abu-Sitteh. File photo courtesy of Todd Dandelske.
"Cindy Nguyen and Rania Abu-Sitteh played excellent singles matches," West Haven coach Kara Kaczynski said. "They both have improved so much. I am very proud of them.
"Overall, I have seen improvement in all my players. We had some close matches this year. My team is very close and they work hard and support each other all the time."

Westies fall to Hamden
West Haven drops 4-3 decision
By MIKE MADERA
Westie Blue
(May 23, 2014) - Looking to pick up its first win of the season, the West Haven girls' tennis team had its best opportunity. Playing a close match throughout, the Westies fell just short as Hamden posted a 4-3 victory.
Falling in three of four singles matches, the loss dropped West Haven to 0-16 on the year.

Branford defeats Westies
West Haven falls 6-1
By MIKE MADERA
Westie Blue
(May 19, 2014) - The West Haven girls' tennis team continues to play hard despite not seeing the results as a  team pan out. Traveling to Branford Monday afternoon, the Westies suffered a 6-1 loss and dropped to 0-15 as a team.
Rania Abu-Sitteh picked up West Haven's lone victory as she won 6-1, 6-4 as the top-seeded singles player for the Westies.
Despite playing well, Evelyn Fabian and Irvie Munor lost as the third seed in doubles play.
"Rania Abu-Sitteh played a great match at one singles," West Haven coach Kara Kaczynski said. "Evelyn Fabian and Irvie Munor played for the first time at three doubles together. They have really improved and played well. The entire team put in a solid effort."

Westies fall to Law
West Haven drops 5-2 decision
By MIKE MADERA
Westie Blue
(May 15, 2014) - West Haven girls' tennis coach Kara Kaczynski is optimistic her team will post that elusive first victory of the season. Unfortunately for the Westies, that win did not come Thursday afternoon against Jonathan Law.
Law won three of four singles matches and two of three doubles contests to post a 5-2 victory over the Westies. With the loss, West Haven fell to 0-14.
Second-seeded Cindy Nguyen won in singles play for West Haven, while the top-seeded doubles team of Talon Yahaya and Nurul Sauffian posted a victory in doubles play.
"Talon Yahaya and Nurul Sauffian played an excellent three set match," Kaczynski said. "Their return of serve and volleys were strong and consistent.
"Cindy Nguyen played her best match yet. Her mental toughness was admirable and she played with confidence."
In singles play, Rania Abu-Sitteh lost to Lianne Maynard 6-0, 6-2, Nguyen defeated Hebani Duggal 3-6, 6-3, 7-5, Shannon Card fell to Victoria Contaxis 6-0, 6-1 and Lhamo Dolma fell to Kate Brady 6-0, 6-0.
In doubles action, Yahaya and Sauffian defeated Sofya Calvin and Raeven Grant 6-4, 2-6, 6-2. Stefania Vendrella and Marla Gagne fell to Megan Gleason and Emma Shea 7-5, 0-6, 6-2 and Maggie Yeh and Cindy Li lost to Sravya Jaladanki and Anna Downs 6-2, 6-4.

Westies fall to East Haven
Yellow Jackets post 5-2 victory
By MIKE MADERA
Westie Blue
(May 6, 2014)- The West Haven girls' tennis team continues to improve. That improvement has not led to a team victory.
The Westies fell to East Haven Tuesday afternoon by a 5-2 score to drop to 0-12 on the season.
"The girls have been really working hard," West Haven coach Kara Kaczynski said. "We lost some close matches. Cindy Nguyen, who plays two singles, lost a tight match. Her overall game has improved so much.
"Talon Yahaya and Nurul Sauffian, who play one doubles, lost a close match as well. They both have improved on their serves and volleys, and they work really well together as a team."
West Haven's victories came in doubles play as Marla Gagne and Stefania Vendrella won as the second seed in three sets.
"They have great team chemistry and they were really attacking at the net," Kaczynski said.
Khari Reynado and Miya Bidon also won in doubles play as the third seed.
"Their mental toughness was great," Kaczynski said. "I am proud of them."

Ram Tough
WH drops to 0-11 after loss to Cheshire
By MIKE MADERA
Westie Blue
(May 5, 2014) - The search continues for the West Haven girls' tennis team. Still looking for its first team victory of the season, West Haven fell to Cheshire Monday afternoon, 7-0 in West Haven. The loss dropped the Westies to 0-11 on the year as a team.
In singles play, top-seeded Rania Abu-Sitteh fell to Nadja Pejovic 6-0, 6-2, second-seeded Cindy Nguyen lost to Sara Bruce 6-1, 6-0 and third-seeded Shannon Card lost a 6-4, 6-1 decision against Durga Rathi. Lhamo Dolma lost in the fourth slot to Amanda Murray 6-1, 6-1.
In doubles play, the top seed of Nurul Sauffian and Talon Yahaya fell 6-1, 6-1 against Katie Freitag and Christy Freitag. Second-seeded Marla Gagne and Stefania Vendrella lost to Ashley Tartaglia and Sidney Tomko 6-2, 6-1, while third-seeded Miya Bidon and Khari Reynado fell to Katherine Wang and Katie Lynch by scores of 6-0 and 6-1.

SHA drops Westies
WH falls 6-1 to drop to 0-10
By MIKE MADERA
Westie Blue
(May 2, 2014) - The West Haven girls' tennis team fell to Sacred Heart Academy Friday afternoon by a 6-1 score. The loss kept West Haven searching for its first victory of the season as it dropped to 0-10 as a team.
The only victory of the day for West Haven came in singles action as Shannon Card defeated Casey Mardk 6-4, 6-3 in the third slot.
In other singles action, top-seeded Rania Abu-Sitteh fell to Monika Krah 6-1, 6-1, Cindy Nguyen lost to Jenna Fortunati in the second slot, 6-1, 7-5 and Lhamo Dolma lost to Maggie Hughes 6-0, 6-0 in the fourth slot.
In doubles action, Nurul Sauffian and Talon Yahaya fell in the top spot against Lucy Anderson and Megan Dwyer, 6-3, 6-4. Second-seeded Stefania Vendrella and Marla Gagne lost to Christine Radwell and Angie Strong, 6-4, 4-6, 7-5 in the closest match of the day and third-seeded Khari Reynado and Miya Bidon fell 6-3, 6-1 against Megan Gray and Margaret Mirabella. 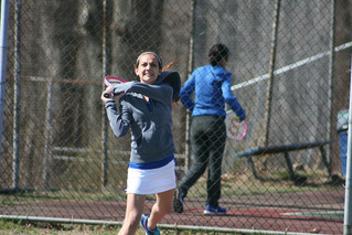 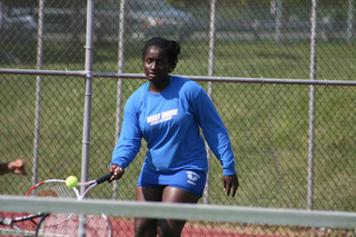 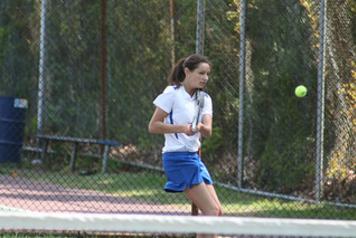 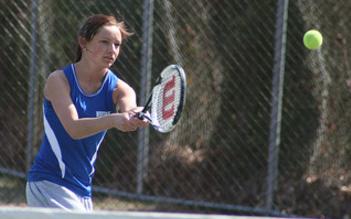