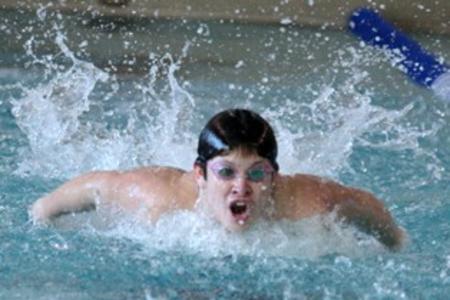 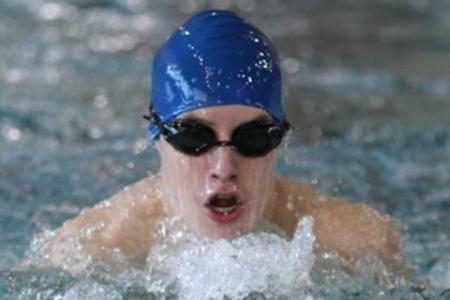 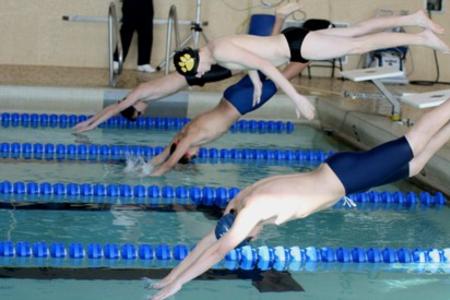 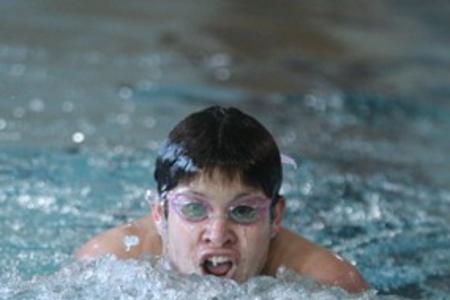 Swim team falls to Hand
Tigers post 93-74 victory over Westies
By MIKE MADERA
Westie Blue
(February 8, 2012) – The West Haven boys’ swimming team fell to Hand-Madison 93-74 Wednesday afternoon. The Westies were victorious in five events in the loss.
Santiago Perez had a solid day for the Westies as he was part of three winning teams. Perez won the 200 individual medley in 2 minutes, 17.50 seconds, the 100 butterfly in 1:04.29 and was part of the winning 400 freestyle relay team along with Geordann Daguplo, Gaelen Rhoads and Gerardo Portillo in 4:16.51.
The 200 medley relay saw a team of Daguplo, Perez, Rhoads and Portillo finish third in 2:03.77, while Carmelo Hernandez, Alyssa Perez, Sebastian Moraga and Haidar Abbas placed fourth in 2:47.16.
Portillo was third in the 200 freestyle in 2:26.01 and Abbas finished second in the 50 freestyle in 28.71 with Hicham Lkhal placing fourth in 35:13.
John Matrisciano won in diving with 88 points while Lkhal was second, two points behind. Portillo had his best time while finishing third in the 100 butterfly in 1:10.67 and Rhoads had his best time while placing second in the 100 freestyle in 1:01.32.
Abbas was fourth in the 100 freestyle in 1:06.73 and Hernandez was sixth in 1:13.01. Daguplo and Matrisciano each had best times in the 500 freestyle as Daguplo was second in 5:47.50 and Matrisciano was fifth in 8:47.09.
The 200 freestyle relay team of Hernandez, Alyssa Perez, Moraga and Abbas was fourth in 2:17.31, while Daguplo placed second in the 100 backstroke in 1:10.89 and Moraga was fifth in 1:42.82.
Rhoads had his best time while winning the 100 breaststroke in 1:15.95. Alyssa Perez was second in 1:58.62.
On Hand’s Senior Day, the Tigers also included the Westies in a sign of good sportsmanship.

Westies fall to Law
Close meet decided by three points
By MIKE MADERA
Westie Blue
(January 31, 2012) - In one of the closest meets of the season, the West Haven boys’ swim team fell to Jonathan Law 91-88 Tuesday evening. The Westies had eight first place finishes but could not pull out the victory.
Geordann Daguplo, Santaigo Perez, Gaelen Rhoads and Gerardo Portillo each had big days. Daguplo and Perez were part of four victorious teams while Rhoads and Portillo were part of three.
All four were part of the victorious 200 medley relay team in 1 minute, 57.89 seconds and the 400 free relay in 4:06.77. The foursome beat out teammates Sebastian Moraga, Alyssa Perez, Carlos Moreno and Haider Abbas who finished second in 5:05.61 in the 400.
Abbas was second in the 200 freestyle in 2:26.52 while Moreno was fifth and Carmelo Hernandez sixth. Santiago Perez won the 200 im in 2:24.61, Portillo was second and Alyssa Perez fifth.
Abbas was third in the 50 freestyle in 29.91, Hicham Lkhal was fourth in diving and Portillo won the 100 fly in 1:13.07, with Moraga placing fifth.
Santiago Perez was first in the 100 free in 55.59 seconds, Rhoads was fourth and Hernandez was fifth, while Daguplo posted a victory in the 500 free in 5:52.43. Moreno finished third as he dropped 30 seconds off his time and John Matrisciano was sixth.
The 200 free relay team of Hernandez, Moreno, Matrisciano and Abbas was second in 2:04.30, Daguplo won the 100 backstroke in 1:10.59 and Rhoads was victorious in the 100 breaststroke in 1:18.90. Moraga was fourth in the 100 backstroke in 1:41.42 and Alyssa Perez placed fourth in the 100 breaststroke.

Westies fall to Foran
WH wins only five events in loss to
Lions
By MIKE MADERA
Westie Blue
(January 24, 2012) – The West Haven boys’ swimming team fell to Foran Tuesday evening 95-75. The 20-point loss saw the Westies take home only five first place finishes.
Geordann Daguplo led the way for the Westies as he was part of five victorious teams. Daguplo won the 100 freestyle in 57.62 seconds, the 100 backstroke in 1 minute, 9.67 seconds and was part of the victorious 400 freestyle relay team in 4 minutes, 16.94 seconds.
The team also consisted of Haider Abbas, Gerardo Portillo and Santiago Perez. Perez was also victorious in the 500 freestyle in a time of 5:29.12.
Gaelen Rhoads was the final victor for West Haven as he won the 100 breaststroke in 1:24.03.
The 200 medley relay team of Daguplo, Rhoads, Perez and Portillo was second in 2:09.13, Perez placed second in the 200 indivdual medley in 2:19.63 and Portillo placed second in the 100 butterfly in 1:12.95.
The 200 free relay team of Carlos Moreno, John Matrisciano, Sebastian Moraga and Rhoads was third in 2:10.69, while Moreno placed second in the 100 backstroke in 1:34.35.
Alyssa Perez finished second in the 100 breaststroke in 2:00.66 and the 400 free relay team of Moreno, Hicham Lkhal, Alyssa Perez and Matrisciano was second in 5:38.37.

Westies fall to Hamden
Despite loss, swim team improves
By MIKE MADERA
Westie Blue
(December 14, 2011) – The West Haven boys’ swim team opened the season with a 99-73 loss against Hamden. Santiago Perez led the Westies as he posted victories in the 200 IM and 100 butterfly and was also part of the victorious 400 freestyle relay team. Gaelen Rhoads also did well, winning the 100 breaststroke as well as participating in the 400 freestyle relay.
“Santiago (Perez) started out right where he should be for the beginning of the season,” Coach Erin Reilly said. “Also, freshman Gaelen Rhoads had two best times in his events and is showing promise as a high school swimmer.”
“Overall, I was pleased.  No one was disqualified so all of the practice we have been doing to make sure all our strokes are legal is paying off.  Everyone competed with heart and our group is functioning as a cohesive team.”
While the Westies did not post many victories, they had several races which went well. The top West Haven time for the 200 medley relay was 2 minutes 4 seconds with Geordan Daguplo, Rhoads, Perez and Gerardo Portillo.
Carmelo Hernandez posted a time of 3:00.30 in the 200 freestyle, Perez had a winning time of 2:19.98 in the 200 IM and Portillo had a time of 28.34 seconds in the 50 freestyle.
“I was impressed with the teamwork,” Reilly said. “Last year’s team was a bit disjointed, but this year everyone is in it together and they all have each other’s back.
“We need to improve our times.  With all of the new swimmers on the team, the improvement from day to day has been exponential.  I am confident that as the boys and girl become more comfortable with the strokes and build up their strength, the times will go down.”
Perez posted a time of 1:07.27 in the 100 butterfly, Rhoads swam the 100 freestyle in 1:02.05 and Daguplo had a time of 6:27.52 in the 500 free.
The 200 freestyle relay team of Sebastian Moraga, Hernandez, Carlos Moreno and Haider Abbas posted a time of 2:19.10, while Abbas swam the 100 backstroke in 1:52.85. Rhoads won the 100 breaststroke in 1:18.81 and the 400 freestyle relay team of Daguplo, Portillo, Rhoads and Perez were victorious in 4:14.

A Work in Progress
Westies looking to constantly improve
By MIKE MADERA
Westie Blue
The 2011-2012 season begins with plenty of enthusiasm for the West Haven boys’ swimming team. With plenty of room to grow, the Westies are approaching the challenge head on.
Leading the charge is senior captain Sebastian Moraga, a versatile outside lane swimmer. Moraga is one of two captains, along with junior Santiago Perez.
Perez is a key returning swimmer for the Westies and he will swim in the butterfly and intermediate events.
Moraga and Perez are joined by Geordann Daguplo. Daguplo, a sophomore, will swim in the 500 freestyle and the intermediate events.
“We would like to win at least one meet this year, but we are still trying to recruit some more experienced talent to build our depth” coach Erin Reilly said. “Everyone is very enthusiastic and willing to learn and work hard. Most of our swimmers are new to the sport, so we have a lot of work to do to get them ready for competition. I really couldn’t ask for a better group of people though.”
Reilly will also get to take a look at freshman Gaelen Rhodes. Rhodes will swim in the breaststroke events.
“We need to practice smart,” Reilly said. “There is so much that goes into every stroke and every race, and if we nail down all those specific things and practice them one hundred percent of the time, we should see good results at meets.”

The race is on against Hand - Madison, February 8, 2012. Photo courtesy of Todd Dandelske. 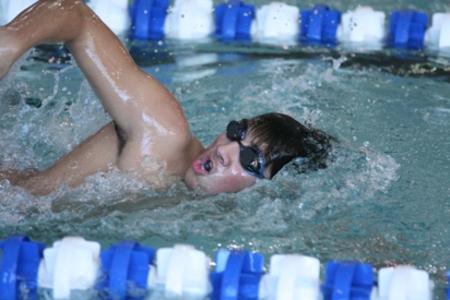