Chris Blagmon wrestled at 160 pounds and won although he is 145 pounds. Photo courtesy of Todd Dandelske. 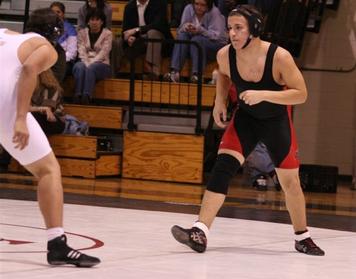 Westie Power
Seven Westies on co-op wrestling team
By MIKE MADERA
Westie Blue
West Haven and Platt Tech have been part of a co-op wrestling team since 2003. With wrestling being a sport which needs numbers, a small school such as Platt Tech combines with West Haven to fill the holes in the lineup.
The Westies have seven members on the team. Those members include freshmen Marcus Militrano and Tyler Sullivan, sophomores Quiten Nivens and Eddie Lugo and juniors Chris Blagmon, Luis Nodal and Rody Cueva.
“Platt Tech-West Haven wrestling has been becoming well known as a powerhouse team,” coach Jeff Benitez said. “This year, we have the lowest numbers we have seen in years. We have a very young team as well with only one senior from Platt on the team.”
Benitez talked about his West Haven wrestlers.
“Marcus (Militrano) comes from a family of wrestlers and got his first win at the Shelton Tourney over the weekend. Chris (Blagmon) is a third-year wrestler. Chris keeps a calm head on and off the mat. Chris has the speed and strength to take down his opponents before they know what hit them.
“Quiten (Nivens) is a first-year wrestler who hit the ground running this year. It’s hard to believe this kid hasn’t wrestled before. He is a natural at the sport and I look forward into seeing what he can do this year.
“Luis is a second-year wrestler. He is quickly learning from his mistakes on the mat, perfecting his style in practice and putting it to good use on the mat. Eddie (Lugo) is another first-year wrestler. Eddie has a lot of heart. He pushes himself everyday. He is now injured and impatiently waiting to get back on the mat.
“Tyler has experience wrestling in a youth wrestling league. He suffered an injury during the football season that carried over into the wrestling season. He is cleared to begin practice next week. Rody Cueva is another first-year wrestler. Rody won his first match at the Shelton tourney over the weekend. He is very strong and where with his lack of experience his brute strength helps. His opponents have a hard time getting Rody down. Rody has a strong desire to get better at wrestling.”
In a 48-33 loss to East Hartford on December 14, 2011, Blagmon pinned Felix Lopez in 2 minutes, 32 seconds, Luis Nodal fell by pin to Anthony Frederico in 2:58, Cueva dropped a decision at 220 to Ammon Allen in 2:20 and Tyler Sulivan won by forfeit at 285.
“We lost to East Hartford 48-33,” Benitez said. “East Hartford walked in with over twenty wrestlers looking at our small team. We came into the match light with wrestlers due to injuries. The team felt good about this first match. Even thought we lost it felt much like a win. Such a young team putting up a great fight. The wrestlers are ready for their next challenge.”
The team followed by wrestling in the Shelton Invitational Saturday. The Platt Tech/West Haven team finished eighth out of nineteen teams.
At 132 pounds, Amity’s Dan Grober won by decision over Dan Izzo 6-0. 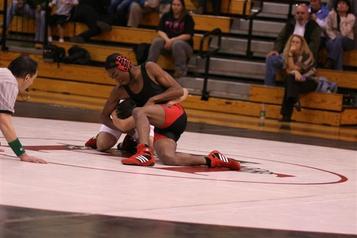