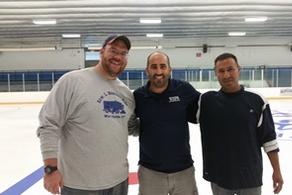 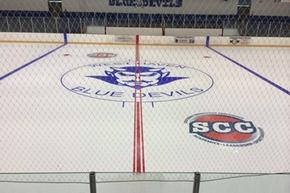 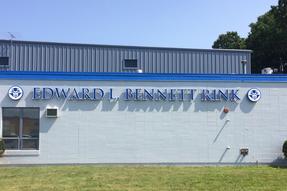 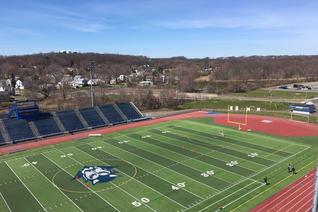 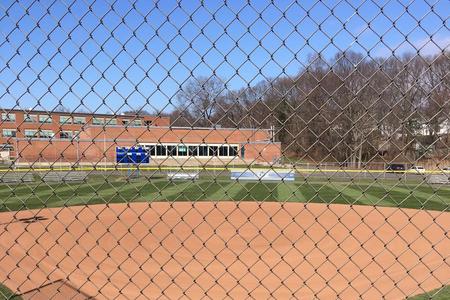 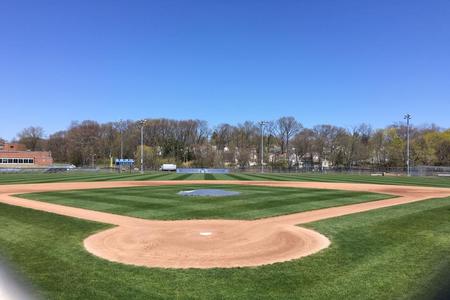 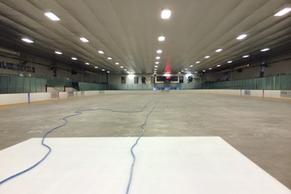 Press Box named for McHugh
(September 29, 2004) - Friday evening’s contest between cross-town rivals Notre Dame and West Haven will have an extra feel of emotion around 7 p.m. Not only are the two teams battling for playoff positions, but the Westies are coming of a rare regular season loss. But, even if the Westie streak was still alive, the emotions would be high for a special dedication prior to the contest.
With all the renovations going on at Strong Stadium, it is only fitting the new press box be named in honor of a legendary Westie. That legend happens to be Joseph S. McHugh and Friday’s ceremony before the contest will be to dedicate the new press box as the Joseph S. McHugh Press Box.
The new press box has been updated inside with a new level for the press, heating, new glass and a separate tier for opposing coaches and cameramen. The renovation of the press box is part of the stadium renovation which includes new bleachers, hand rails and aisles.
“He (McHugh) was a history teacher for 33 years and he coached five different sports at West Haven. That is unusual. One is now the norm and some coaches coach two sports. He also started the lacrosse program in 1972 and that is still going,” West Haven athletic director Jon Capone said. “His claim to fame was football. He was known as “The Coach” in West Haven and he was a great sportsman for the town of West Haven.”
Board member Anne Heffernan came upon the thought of having the press box named in McHugh’s honor. Heffernan brought the suggestion to Capone, who approved the idea and brought the suggestion to the Board of Education. The proposal was brought before the Board of Education and was passed unanimously.
McHugh was named to the first Hall of Fame class at West Haven. He was a graduate of West Haven High in 1951, where he played football, basketball and baseball. McHugh was cited as an All-American in football following his senior year.
After serving in the United States Navy, McHugh attended NH State Teachers College from 1955-1959. He played four years of football and track and graduated with a Bachelor’s of Science in Social Studies and Physical Education. McHugh returned to West Haven High in 1963 where he taught history and coached football.
“The Coach” had a 33-23-1 record from 1963-1969 and his 1968 team was probably the best known. That team finished with a 9-0 record, was ranked number one in the state and number five in the nation. McHugh was also the assistant coach in basketball and track for two years each and was the assistant coach in hockey for one year. He started the lacrosse program and coached the team for seven years. McHugh has the honor of coaching more sports than anyone else in school history. 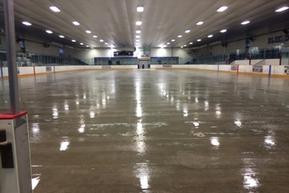 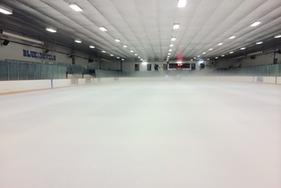 Hockey Paradise
Plenty involved with getting rink ready
By MIKE MADERA
Westie Blue
(September 3, 2014) - The Edward L. Bennett Rink gets plenty of visitors throughout the year. Whether it is a youth hockey game, high school or college, the ice is always ready.

Edward L. Bennett Rink
While this may look like a simple task, getting the ice prepared for a season which lasts seven to eight months is a long and involved process.
Athletic facilities manager Chris Everone recently began the process of setting the ice.
Before all the necessary steps could be taken, plenty needed to be done. While most athletes were preparing and or playing in spring sports, Everone and his staff, including Matt Blotney and Alberto Moreno, were taking up the ice.

​West Haven Facilities manager Chris Everone describes the process of removing the ice.
Once the ice is gone, all the paint and logos which are under the ice also have to be removed.
The rink remains ice free and the Bud Conlan Street Hockey League takes place during the summer. As the summer league is coming to a close, preparations to install new ice are being made.

Chris Everone describes the next phase.
After the rink surface is dirt and particle free, the first order of business is to give the ice surface some color. With members of the hockey team assisting in the painting and Yale University's George Arnaoutis coordinating with Everone, the process starts to take shape.

Once the ice is clear of debris, the surface is cleaned....

...allowing for the first of several coats of white paint to be applied.

The surface is completely covered in white paint, setting the way for the lines and logos to be applied. Photos courtesy of Chris Everone.

Chris Everone on painting the ice.
The ice is given a fresh seal, setting up the process of getting the surface hockey-ready with all the necessary lines, including the blue lines, center ice and goal lines.

Chris Everone on painting the lines.
The blue lines may be the easiest part as painting the faceoff circles and dots comes next. While it takes a trained eye to make the perfect circle, Everone and his staff seem to have this perfected.

Chris Everone on painting the goal crease.
This season, Everone and his staff have added to the look of the ice by putting the Southern Connecticut Conference logo down. The sharp image stands out immediately.

The West Haven Blue Devil and Southern Connecticut Conference logos. Photo courtesy of Chris Everone.
The next phase of painting the Blue Devil at center ice is very complex. Using several templates and numerous hours by hand, the Blue Devil is the last image painted on the ice.

Chris Everone on the effort it takes to put the Blue Devil logo on the ice.
With help from numerous people, including members of the high school hockey team, the logo is painted and the lines are down. The ice surface is then sealed by the staff.

Chris Everone on sealing the ice.
The final phase now begins as the ice ice is slowly built up. This process is done in stages to allow the ice to set.

Chris Everone describes how the ice will be built with Matt Blotney watering the surface.
With the ice down and ready to go, the zamboni is used to clear, smooth and clean the surface.

Matt Blotney uses the zamboni to clean the ice and prepare the surface for play.
All that is left now is for the games to begin.
It is a process which takes several days and numerous hours to leave a perfect print. For Everone and his staff, they would not want it any other way.

Chris Everone talks about the process of putting down the ice.