Hamden tops Westies
West Haven falls in season opener
By MIKE MADERA
Westie Blue
(September 9, 2021) - Looking to get off to a quick start to the season, the West Haven volleyball team fell just short. In what was a tough battle, the Westies fell on the road in their season opener against Hamden, 20-25. 23-25, 25-19, and 17-25.
“The beginning of the season has felt very rushed, so we are still working the kinks out,” West Haven coach Kate Coldren said. “We played well, but we definitely know what we have to work on. Passing continues to be my biggest concern. We have to get our passing more consistent because we have some really great hitters that need to get the ball.”

Jenna Johnson (8) and the Westies fell to Hamden in the season opener, September 9, 2021. Photo courtesy of Todd Dandelske.
After losing two close games to open the match, the Westies rallied back in the third game to post a 6-point victory. West Haven could not sustain that momentum in the fourth game and fell by eight points.
Junior Jenna Johnson led the Westies with nine assists, four kills, and three aces on the offensive side, and seven digs defensively. Junior Dulcemaria Castillo had six digs, while junior Tanasia Fidalgo added five kills, three blocks, and two aces.
“Jenna (Johnson) had a very good game tonight and she's doing well with her setting,” Coldren said. “Both Asia (Ford) and Tanasia (Fidalgo) did well hitting and blocking. We are a work in progress, and I am looking forward to seeing how far this team goes this season.”
Seniors Mckayla Fowler and Anaelecea Turcio each had four digs in the loss.

Blanked
West Haven falls to Sheehan
By MIKE MADERA
Westie Blue
(September 15, 2021) - After losing the season opener on the road against Hamden, the West Haven girls volleyball team was looking forward to playing at home. Unfortunately, Sheehan spoiled the homecoming.
Despite playing well in the first two games, the Westies did not have enough in a 3-0 loss to the Titans Wednesday afternoon at West Haven High.
“We started off pretty strong, but after dropping the first two games, I think we lost some confidence and energy,” West Haven coach Kate Coldren said. “We really need to stay focused and fight until the bitter end. I know they can do it. They need to believe it as well.”
Asia Ford led the Westies with eight kills and four blocks, while Jenna Johnson had five assists, three digs, and three kills. Dulcemaria Castillo led the way defensively with four digs.
“Asia (Ford) and Jenna (Johnson) both played really well on offense and are working well together,” Coldren said. “Jordyn (Johnson) and Dulce (Castillo) were both very consistent with their passing. I'm really proud of the progress the girls are making and we need to keep working hard.”

East beats West
West Haven falls Yellowjackets 3-1
By MIKE MADERA
Westie Blue
(September 17, 2021) - The West Haven volleyball team fell to 0-3 to start the season with a 3-1 loss at East Haven Friday evening. The Westies battled but fell 25-22, 25-27, 17-25, 17-25.
“Our frustration level is high right now,” West Haven coach Kate Coldren said. “We have to figure out how to work past mistakes and fix them quickly. If we can't get our offense going, we won't win games. Our whole mind-set and attitude needs to change to a more positive and confident one. Luckily, we are early in our season and this is the time to make the necessary adjustments.”
Asia Ford led West Haven with eight kills, while Jenna Johnson had seven assists and four digs. Mckayla Fowler added four kills, two digs and two aces in the loss.“Mckayla (Fowler) and Tanasia (Fidalgo) did well at the net,” Coldren said “Jordyn (Johnson) was the most consistent passer.”

Heartbreaker
West Haven falls to SHA in thriller
By MIKE MADERA
Westie Blue
(September 20, 2021) - The West Haven girls volleyball team played a tough match Monday afternoon at West Haven High. While it may have been the best the Westies have played thus far this season, it was not enough as Scared Heart Academy sent West Haven to its fourth straight loss to open the year.
In a hard fought match, the Westies fell 18-25, 25-20, 18-25, 25-21, 6-15.
“We played very well and worked hard tonight,” West Haven coach Kate Coldren said. “It's a shame we couldn't pull this one out. We definitely got nervous and played tentatively in the fifth game, so we made way too many unforced errors. Other than that, we played much more consistent volleyball and worked through our errors and stayed positive,”
Junior Jenna Johnson ran the offense with 24 assists, while adding five kills. She also had six digs on the defensive side. Dulcemaria Castillo led the defense with 16 digs, while Jordyn Johnson had seven digs, and Branyelis Brito and Mckayla Fowler each added six digs.
Tanasia Fidalgo and Asia Ford also played well on the offensive side with 11 and eight kills, respectively. Fidalgo also added four blocks.
“Jenna (Johnson) had an all-around great game,” Coldren said. “She made smart decisions with her setting and she really stepped up and led our offense. Both Asia (Ford) and Tanasia (Fidalgo) played well at the net and Dulce (Castillo) had an outstanding game defensively.” 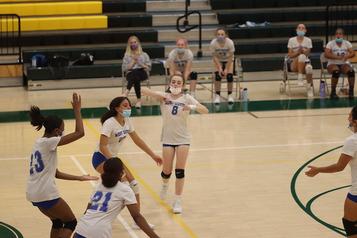