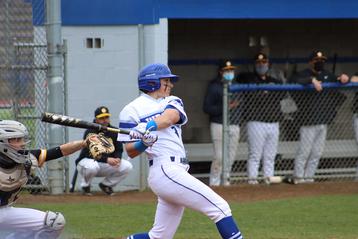 Ready to Go
WH looking for postseason play
By MIKE MADERA
Westie Blue
(April 11, 2021)  - So much has changed since the West Haven baseball team last set foot on the diamond in 2019. Two years have past and a new cast of players will be counted on for a successful season.
Those players will be led by a solid group of upperclassmen who will be expected to take West Haven where it belongs and that is making a deep run into the postseason.
“My goal is to have a winning season,” West Haven coach Ron Luneau said. “We want to make an impact in both tournaments. We want to play in the SCC tournament. To do that, we have to be able to throw strikes, make plays in the field, and get those timely hits.”

Isiah Wyatt and the Westies are ready for the 2021 season. Photo courtesy of Todd Dandelske.
Leading the way for the Westies will be senior captains Tyler Jones and Hunter Axelrod. Jones will anchor the infield at shortstop, while Axelrod will play left. Both captains will also pitch, with Axelrod slotting in the starting rotation and Jones looking to see time in relief.
The infield for the Westies will mainly see senior Isiah Wyatt at first, junior Tyler DeSanty at second, and a mix of juniors Dylan Supan and Gianni Gambardella at third. Gambardella will open the season as the team’s ace, with Supan the second man up in the rotation. Freshman Ray Gilbert may also see some time at the hot corner for West Haven.
West Haven also has an experienced outfield. Leading the way in center will be senior Dan Izzo, who came over from Notre Dame-Fairfield. Axelrod will play left when not on the mound, while senior Mike Boni will be in right.
“As a group, this is the best outfield I have had,” Luneau said.
Senior Anthony Rubin will start behind the plate, while junior Corey Coggins will also see time catching.
Junior Jake Romano will also see time on the pitcher’s mound, while Izzo may best slot in as the team’s closer.
“I like this group of kids,” Luneau said. “They have all played with me since their freshmen or sophomore years. This group of kids likes each other. They have fun and they get their work done. For us, the keys will be getting timely hits, solid pitching and solid defense.”
While West Haven looks to be solid pitching and defensively, the offense may be the best the team has had in years. From top to bottom, Luneau has players who can put the ball in play, which will be the key against some high-scoring teams on the schedule.
“Izzo has been a really good pick up for us,” Luneau said as he enters his seventh year at the helm of the Westies. “He will make a big difference in our team. He is a good outfielder, pitches well, and is very athletic. Gianni (Gambardella) has started since he was a freshman. We expect big things out of him batting, pitching, and in the field.”
With a lineup which looks to see Jones starting things off and followed by Izzo, Gambardella and Boni, the top half is solid. Wyatt and Axelrod should follow, with Supan, Rubin and DeSanty having key at bats in the lower half of the order.“This team can possibly be one of the best offensive teams we have had here since my first year,” Luneau said. “This group is similar to that group in terms of hitting the ball. We have the potential to be like that. We have the potential to hit throughout the lineup.”

Hand tops Westies
WH falls in opener 5-1
By MIKE MADERA
Westie Blue
(April 12, 2021)  - The West Haven baseball team was looking to get off to a good start in the 2021 season. Unable to string together many hits, West Haven fell to Hand-Madison 5-1 in the season opener for both teams Monday afternoon at Piurek Field in West Haven.
The Westies were held to just six hits in the game, two coming off the bat of Corey Coggins. The West Haven designated hitter's second hit drove in the only run of the game in the seventh inning with West Haven down 5-0.

Dan Izzo with a base hit against Hand, April 12, 2021. Photo courtesy of Todd Dandelske.
The lack of offense and four errors hurt West Haven starter Gianni Gambardella as Gambardella allowed just five hits and three runs, two of which were earned, through six innings. Gambardella struck out eight and walked two in the loss.
Hunter Axelrod pitched the seventh, allowing two hits and two runs (one earned), while walking one and striking out one.
West Haven's Mike Boni walked with two outs in the first, but was left stranded. Coggins singled with one out in the third, but was picked off first, before Dan Izzo got into scoring position in the fourth when he singled and moved to second on a fielder's choice by Boni.
With two outs, Isiah Wyatt singled to left to put runners on the corners, but a fly out to right by Anthony Rubin ended the threat.
The Westies threatened again in the sixth, but could not get the timely hit. After Tyler Jones walked, Izzo grounded into a fielder's choice to force out Jones. Gambardella singled to short to put a pair of runners on, but Wyatt grounded out to end the inning.
West Haven finally got on the board in the seventh as Ray Gilbert singled to lead off the inning, stole second, and scored on a single by Coggins. 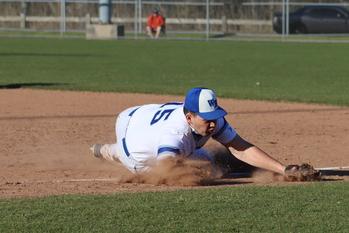