Hamden tops Westies in Opener
West Haven falls 3-1
By MIKE MADERA
Westie Blue
(October 2, 2020) - The West Haven volleyball team opened the 2020 season with a contest against Hamden. While the game would usually be a big one because of the rivalry, this contest signified the start of high school play once again after the pause due to COVID-19 restrictions.

With play starting, the Westies did not get off to the start they would have liked in a 14-25, 25-19, 22-25, 12-25 loss to the Green Dragons.
"It was a tough loss for our season opener," West Haven coach Kate Coldren said. "We have a lot of new players on varsity this season, so we're still getting used to each other and trusting each other on the court. I believe that our nerves got the best of us and we were very sloppy at times. When we settled down a bit and got our skills in order, we looked very good. There needs to be constant communication and support throughout the match. We have to work through mistakes and all the growing pains of this crazy season and we will do very well."
Savannah Lopez led West Haven with 10 assists and seven digs, while Neve Krajcir had 12 digs and five kills. Lexi Prion added nine digs, and Tanasia Fidalgo had three kills and three blocks.
"Savannah (Lopez), Neve (Krajcir) and Lexi (Prion) all played well," Coldren said. "Lexi and Neve did a great job on defense and Savannah has become a consistent all-around player and a fantastic setter."

Neve Krajcir (6) prepares to set the offense against East Haven, October 3, 2020. Photo courtesy of Todd Dandelske.
"I saw tremendous improvement today," West Haven coach Kate Coldren said. "We were very evenly matched with East Haven and it was a great match. We were definitely more settled and we were able to get our offense going. We then struggled with serve receive in the fifth game."
Savannah Lopez led West Haven with 11 assists, eight digs, six aces, and four kills. Dulcemaria Castillo had nine digs, Neve Krajcir had seven digs, four kills, and three aces, while Lexi Prion had four aces and four digs. Asia Ford had six kills and Anaelecea Turcio had six digs.
"Savannah (Lopez) had another good game today and made really great choices on offense," Coldren said. "Asia (Ford) played very well in the front row and is going to be a force at the net this season."

First of the Season
Westies top Whitney Tech 3-1
By MIKE MADERA
Westie Blue
(October 5, 2020) - The West Haven volleyball team is in the win column. After falling just short in the first two matches of the season, the Westies rebounded to pick up their first victory with a 23-25, 25-8, 25-17, 25-13 victory over Whitney Tech Monday evening at West Haven High.

Tanasia Fidalgo (4) was strong at the net for West Haven against Whitney Tech, October 5, 2020. Photo courtesy of Todd Dandelske.
“It was a nice win tonight,” West Haven coach Kate Coldren said. “We got off to a rocky start, but we pushed through and got back on track. It was a solid team effort and we did a great job on both sides of the ball.”
Savannah Lopez ran the West Haven offense with 27 assists, while adding six aces, five kills, and three digs. Neve Krajcir also had a strong contest with 12 digs and seven kills. Asia Ford added eight kills, Tanasia Fidalgo had seven kills, Lexi Prion had seven digs, Mckayla Fowler chipped in five kills, and Anaelecea Turcio added four aces and two digs in a complete team effort.“Asia (Ford), Neve (Krajcir) and Tanasia (Fidalgo) were solid at the net, and Lexi (Prion) and Neve were very consistent in the back row,” Coldren said. “We had a few too many unforced errors, but we're moving in the right direction and improving every day.”

Anaelecea Turcio (1) makes a play earlier in the season for West Haven. Photo courtesy of Todd Dandelske.
“Honestly, the score doesn't reflect the improvements that this team has made,” West Haven coach Kate Coldren said. “We worked extremely hard on defense and served aggressively. We had trouble getting our offense into a rhythm. We played more relaxed and confident than we have all season and we are starting to trust each other and get used to playing together.”
Savannah Lopez led the Westies with 10 digs and eight assists. Lexi Prion played well defensively with six digs, Dulcemaria Castillo had three aces and three digs, while Neve Krajcir had four digs and two kills, and Asia Ford added four kills.“Savannah (Lopez) and Lexi (Prion) played great on defense and when we could get the ball to Asia (Ford) in the middle, it was a kill every time,” Coldren said.

Dulcemaria Castillo (31) against Hand, October 12, 2020. Photo courtesy of Todd Dandelske.
“As tough as tonight's loss was, we have a lot to be proud of,” West Haven coach Kate Coldren said. “I'm seeing huge improvements in everything this team is doing. I've seen tremendous improvements in skills, confidence, and positive attitudes. Tonight, it just came down to mental errors. We were ahead in the fifth game and we let up and started to panic when we made mistakes.”
Senior Savannah Lopez led the team with 18 assists, six aces, and four kills on offense, while adding five digs on defense. Neve Krajcir played well with nine kills, four aces, and three digs, Tanasia Fidalgo had five kills and three blocks. Mckayla Fowler added five kills and four aces, and Dulcemaria Castillo, Lexi Prion and Anaelecea Turcio each added three digs. Asia Ford finished with three aces and three kills.
“Savannah (Lopez) and Neve (Krajcir) carried the team tonight,” Coldren said. “Both had all-around great games. Mckayla (Fowler) also had a great game. She served tough and had some really smart plays in the front row. We need to stay on this path of improvement and get ready for Lauralton on Thursday.”

Lauralton Hall tops Westies
WH falls to 1-5 with loss
By MIKE MADERA
Westie Blue
(October 15, 2020) - The West Haven girls volleyball team fell to 1-5 with its third straight loss, a 3-1 decision at Lauralton Hall Thursday evening. The Westies fell by scores of 21-25, 19-25, 25-23, 18-25.
“We played very inconsistent volleyball tonight,” West Haven coach Kate Coldren said. “We couldn't get into any kind of rhythm at all. We fell behind two games and even though we fought back to win the third game, we just couldn't hold it all together.”
Savannah Lopez ran the offense with 26 assists, with three aces and two kills. Neve Krajcir finished with 14 digs, nine kills, and four aces, Mckayla Fowler had eight kills and four aces, Tanasia Fidalgo added seven kills, Asia Ford had five kills, and Lexi Prion had four digs in the loss.
“Mckayla (Fowler) had a good game tonight,” Coldren said. “She is steadily improving in the front row and made some really smart plays. Neve (Krajcir) also had a good game on both offense and defense. The second half of our season starts next week, and we need to regroup and keep working hard so we can improve our record.”

West Haven fell to Hamden, October 19, 2020. Photo courtesy of Todd Dandelske.
“It just wasn't our best volleyball tonight,” West Haven coach Kate Coldren said. “We didn't seem ready for the game at all. We were a step behind every ball on defense and serve receive, and never made any adjustments.  We are very capable, and we just haven't clicked as a team yet.”
While the Westies battled, it was not enough in each game. Neve Krajcir played well for the Westies defensively with 16 digs, while adding three aces and three kills offensively. Savannah Lopez had seven assists and five digs, Asia Ford had four aces and four kills, Mckayla Fowler added four kills, and Lexi Prion had three digs in the loss.“Asia (Ford) and Mckayla (Fowler) are really starting to step up on offense and are playing very smart volleyball right now,” Coldren said. “I am still hopeful that we can turn things around and end the season on a positive note, but we are going to have to make the commitment and work hard to make it happen.”

“We are really struggling as a team,” West Haven coach Kate Coldren said. “No matter how hard we are working in practice, communication and trust are still a major issue. If we can't dig deep and do what we need to do in our last 4 games, we will keep having the same results.” 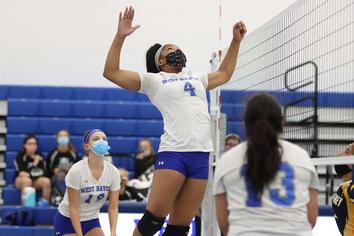 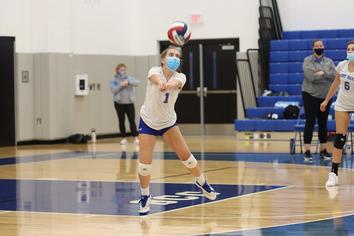 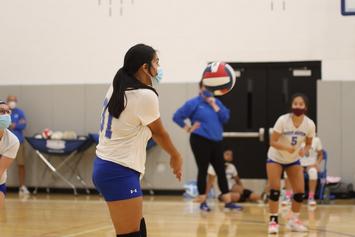 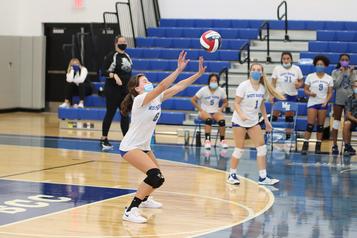 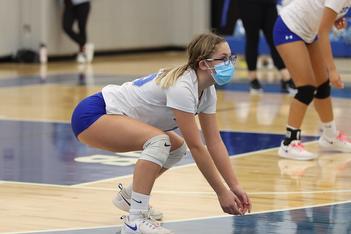