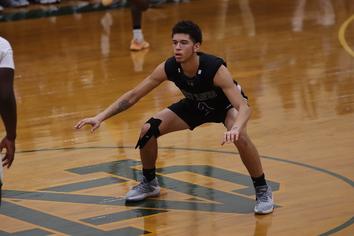 ND trounces Westies
WH falls 77-40 in season opener
By MIKE MADERA
Westie Blue
(December 16, 2021) - The West Haven boys basketball team knew the start of its season was going to be tough, squaring off against powers Notre Dame-West Haven and Naugatuck to open the campaign. The Westies saw just how tough Thursday evening.

Holding the Westies to just two first quarter points, the Green Knights easily defeated the Westies 74-40 at Notre Dame in the season opener for both teams. Mekhi Conner led the way for the Green Knights with 18 points as the contest was never in question.
West Haven struggled from the start, finally getting on the scoreboard with six seconds to go in the opening quarter on a basket by Adam El Kharraz. Notre Dame responded with a bucket by Amare Davis at the buzzer, taking a 12-2 lead after one quarter.
For all of West Haven’s struggles in the first quarter, there was still time to make up the 10-point deficit. That time quickly faded away as the Green Knights opened the second quarter on a 9-0 run for a 21-2 lead.
The Westies never stopped the Green Knights to slow the momentum and Notre Dame built a 36-12 lead at the half.
Kyle Kearson’s basket got the Westies within 25-6 and a 3-pointer by Henry Smith had West Haven within 26-9, but the Westies never got closer.

First of the Season
WH tops Foran 61-35
By MIKE MADERA
Westie Blue
(January 4, 2022) - After starting the season with a pair of losses, then enduring more than two weeks off, the West Haven boys basketball team returned to action with a 61-35 victory over Foran at Foran High Tuesday evening.
The Westies were in control from the start with eight different players in the scoring column, led by Henry Smith with 15 points.
West Haven turned up the defense in the opening quarter, holding the Lions to two points and taking a 12-2 lead behind six points from Manny Belcher. The Westies extended the margin to 29-13 with a 17-11 margin in the second quarter as Smith added eight points.
The Westies put the game away with a 21-6 run in the third quarter. Smith had seven points in the quarter, Tavares Tuck added six points, and Belcher drained a 3-pointer.Tuck and Belcher each finished with 11 points, while Jared Butler and Javaun Calhoun each scored eight.

WH rolls past East Haven
Third quarter run propels Westies to 65-25 win
By MIKE MADERA
Westie Blue
(January 4, 2022) - The West Haven boys basketball team returned to action by getting back in the win column. With nine players in the scoring column and a pair in double digits, West Haven cruised to a 65-25 road victory over East Haven Tuesday evening.
Leading 22-15 at the half, West Haven (2-3) put the game away with a 21-0 run in the third quarter. Javaun Calhoun had nine points in the quarter, while Henry Smith added six in the third.
West Haven closed the game on a 22-9 run and finished the second half outscoring East Haven 43-9. Jared Butler led West Haven with seven points in the final quarter.
The Westies jumped out to a 17-8 lead in the first quarter as Adam El Kharraz, Butler and Smith each drained 3-pointers. Butler had seven points in the quarter and Smith added five. Tavares Tuck scored the only five points in the second quarter for West Haven.
Butler led West Haven with 14 points, Smith had 13, and Tuck and Calhoun each scored nine.

Green Knights top Westies
ND sweeps season series
By MIKE MADERA
Westie Blue
(January 14, 2022) - The West Haven boys basketball team was looking to rebound from an opening day defeat against cross-town rival Notre Dame-West Haven in the second meeting of the two teams Friday evening. The second contest was reminiscent of the first.
Not allowing West Haven to get going offensively, the Green Knights cruised to a 76-43 victory at West Haven High. With the loss, West Haven dropped to 2-4 on the year.
The Westies hit just once from 3-point range in the game and were unable to get going on the inside. The Green Knights led 18-8 after one quarter and 36-14 at the half, which proved too much for the Westies to overcome.
The Green Knights jumped out to a 7-2 lead, before West Haven got within two points on a bucket and free throw by Tavares Tuck. The Westies never got closer.
Jared Butler got West Haven within 13-7, before a free throw by Henry Smith had the Westies within 18-8. The Green Knights scored the first five points of the second quarter for a 23-8 lead.
Kyle Kearson got West Haven within 24-10, but that was as close as the Westies got.

Tuck led the Westies with 11 points, Javaun Calhoun had eight, and Jared Butler scored six in the loss.

Westies run past Sheehan
Tuck leads way in 66-38 victory
By MIKE MADERA
Westie Blue
(January 17, 2022) - The West Haven boys basketball team got back on the winning track and improved to 3-4 with a 66-38 victory over Sheehan at West Haven High Monday evening.
Eight different players were in the scoring column, and Tavares Tuck led a balanced attack with 21 points. Adam El Kharraz scored 15 points and Javaun Calhoun scored 12 in the victory.
The Westies set the tone of the game early, taking an 18-7 lead after one quarter. El Kharraz hit a pair of 3-pointers in the opening quarter and finished with eight points in the opening eight minutes, while Tuck added four in the quarter.
West Haven extended the margin to 35-20 in the second quarter. Calhoun had six points and Tuck four as the Westies had a 15-point margin at the half.
The lead extended to 21 points in the third quarter as Tuck hit a big 3-pointer and finished with seven points in the third. Tuck scored six and El Kharraz added five in the final eight minutes.

West Haven’s defense was stellar throughout, holding the Titans to 20 points and under in each half. 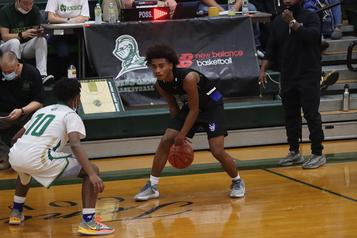