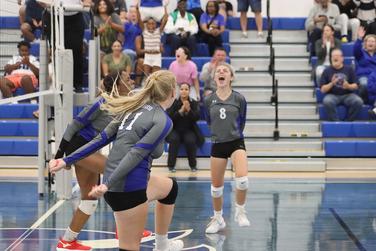 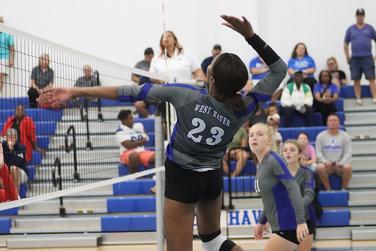 Westies top SHA
West Haven sharp in season opener
By MIKE MADERA
Westie Blue
(September 8, 2022) - The West Haven volleyball team is well aware of the strength of its schedule. A quick start is always helpful to jump start the season with a goal of playing in the state tournament.
Senior Jenna Johnson made sure the Westies started the season with a victory. Serving four straight aces, Johnson led West Haven to a 23-13 fourth game lead and West Haven never looked in defeating Sacred Heart Academy 25-13, 25-23, 21-25, 25-18 in the season opener for both teams at West Haven High Thursday evening.
“As a team, we have been working so hard to remain positive and maintain a total team atmosphere and all of that work showed,” West Haven coach Kate Coldren said. “We played so well and when we got down, we fought back to get an incredible win to start the season.  I couldn't be more proud of this team.”
After winning the first game, West Haven was in a battle in the second game, trailing 23-22, before scoring the last three points on a kill by Tanasia Fidalgo, and a pair of aces by Asia Ford for a 25-23 victory.
The Westies led 18-17 in the third game on a kill by Johnson, but the Sharks closed the game on an 8-3 run to force a fourth game.
“Alison (Frazer), Dulce (Castillo), and Jordyn (Johnson) were unstoppable on defense and serve receive, and Asia (Ford) and Olivia (McDonnell) made a ton of big plays at the net,” Coldren said. “Jenna (Johnson) played a very consistent smart game, which is important as the setter of the team. Everyone on the team supported each other and all of the seniors led the way. We have a long season ahead of us, but if we can maintain the energy we had tonight, we will be very successful.”
With Ford on the service line, West Haven jumped out to a 10-5 lead on a block by Fidalgo, an ace by Ford, and a kill by Dulcemaria Castillo. A block by Ford increased the lead to 16-12, before Ford’s kill increased the margin to 19-13.
Johnson then took over as four aces increased the lead to 23-13. The Sharks rolled off four straight points, before West Haven pulled off the victory.

Westies fall to Hamden
Comeback falls short in 3-2 loss
By MIKE MADERA
Westie Blue
(September 12, 2022) - The West Haven girls volleyball team fell to 1-1 with a hard-fought 3-2 loss at Hamden Monday evening. Trailing 2-0, the Westies rallied back, but came up just short in the loss by scores of 20-25, 23-25, 27-25, 25-15, 11-15.
“It was a tough loss, but a huge learning experience for us as a team,” West Haven coach Kate Coldren said. “They are really showing me how much heart they have. They had their backs against the wall and they came back fighting. I'm beyond proud of them. We just had a few mental errors in the fifth set that were very unfortunate, and led to the loss.”
The Westies lost the first two games, before rallying in the next two. West Haven won a nail-biter in the third game, before cruising in the fourth. Unfortunately, the rally ended in a four-point loss in the final game.
“Asia (Ford) was strong in both the front and back row,” Coldren said. “Sarah Davey had a fantastic game for her first time playing varsity. Our defense was outstanding as well. Alison (Frazer), Madison (Scillia), Taylor (Alfano) and Jordyn (Johnson) picked up everything. I'm confident that we will recover quickly in order to play Cross.”

Sarah Davey ran the offense with 15 assists, while also playing solid on defense with 17 digs. Asia Ford had 13 digs, Alison Frazer and Taylor Alfano each had 12 digs, and Jordyn Johnson and Madison Scillia each had seven digs.

Bouncing Back
West Haven rebounds to defeat Wilbur Cross
By MIKE MADERA
Westie Blue
(September 13, 2022) - West Haven coach Kate Coldren and her squad needed just one day to bounce back from a nail-biting loss to Hamden. After suffering another close loss in the first game, the Westies got back on track and rebounded to defeat Wilbur Cross 24-26, 25-16, 25-14, 25-15 in New Haven Tuesday evening.
“It took a game to wake up,” Coldren said. “When we got our feet under us, we played well. We gradually got better as the game went on. Cross is a scrappy team, so we had to be smart and try to find holes in their defense. After the first two games, we were able to really get our serves and offense going.”
“Asia (Ford) and Olivia (McDonnell) both had great games and dominated at the net,” Coldren said. “Alison (Frazer) and Dulcemaria (Castillo) played very consistent in the back row.”
Jenna Johnson ran the offense with 18 assists, while Asia Ford had 10 kills, eight digs, four aces, and three blocks, and Olivia McDonnell had six aces, six kills, and four digs.

​Two in a Row
West Haven rolls past Career
By MIKE MADERA
Westie Blue
(September 15, 2022) - The West Haven volleyball team won its second straight contest and improved to 3-1 on the year with a 3-1 home victory over Career Thursday evening. With the 25-6, 24-26 25-16, 25-18 victory, West Haven improved to 3-1 on the year.
“It was a solid team effort,” West Haven coach Kate Coldren said. “We started off very strong and played great. In the second game, we let up and gave them some confidence and momentum, but we came back and got the win. As a team, we served and passed tough, so we were able to run our offense and score a lot of points off of serves.”
Jenna Johnson ran the offense with 13 assists and four aces, Asia Ford had seven aces and six kills, Alison Frazer had nine aces, and Olivia McDonnell had eight kills and four aces.
Dulcemaria Castillo, Frazer, and Astrid Portugal Morales had six digs, while Shannon Hoey added four digs.

​Rally Time
Westies win thriller in comeback fashion
By MIKE MADERA
Westie Blue
(September 19, 2022) - The West Haven volleyball team won its third consecutive match and improved to 4-1 on the season with a 3-2 victory over Branford Monday evening at West Haven High. The Westies lost the first two games, but battled back in the dramatic victory to win by scores of 21-25, 22-25, 25-22, 25-8, 15-13.
“I'm so proud of this team tonight,” West Haven coach Kate Coldren said. “We fought back from being down 2-0. We dug deep and found the energy we were lacking in the first two games and were able to pull this one out. Moving forward, we have to do better as a team to start off stronger and take control of the game.”
After falling in the first two games, the Westies battled to win the third game, before controlling the fourth game. A back-and-forth fifth game went to the Westies to preserve their third straight victory.
“Olivia (McDonnell) was tremendous at the net and Asia's (Ford) serves were on point,” Coldren said. “After a slow start, the defense really stepped up and Alison (Frazer) and Astrid (Portugal Morales) led the way.”
Jenna Johnson ran the offense with 25 assists, while also adding seven digs and four aces. Olivia McDonnell and Asia Ford were forces at the net as McDonnell finished with 16 kills, four blocks, and four digs, while Ford had 14 aces, eight kills and eight digs.

Alison Frazer was stellar defensively with 16 digs, while Tanasia Fidalgo had six kills and four digs, and Jordyn Johnson, Dulcemaria Castillo, and Astrid Portugal Morales each had five digs in the win.

Sweep
Westies cruise past Norwalk
By MIKE MADERA
Westie Blue
(September 21, 2022) - The winning streak has reached four matches for the West Haven volleyball team. With another impressive team effort, the Westies improved to 5-1 with a 25-8 25-19 25-18 victory at Norwalk Wednesday evening.
“It was a total team effort tonight,” West Haven coach Kate Coldren said. “We served tough and that made all the difference. Our passing was a little inconsistent, but we definitely pulled it together when we needed to.”
For the Westies, it was not just one player which made an impact. Coldren’s crew all contributed in some phase of the game.
“Asia (Ford), Astrid (Portugal Morales), and Olivia (McDonnell) were fantastic on the service line,” Coldren said. “Jenna (Johnson) played great and made smart decisions on offense. Everyone that came in off the bench was ready to go, and I couldn't have asked for a better team effort.”
Offensively, Asia Ford led the way with nine kills and eight aces. Jenna Johnson had six assists and three aces, Olivia McDonnell had four aces and three kills, and Astrid Portugal Morales added five aces in the win.