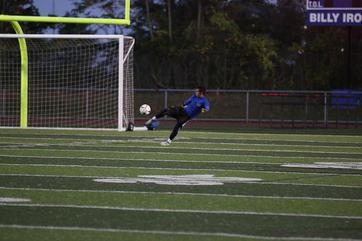 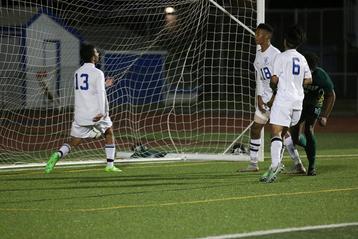 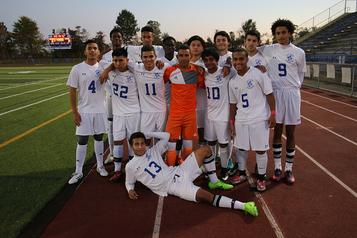 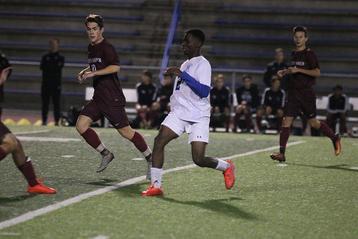 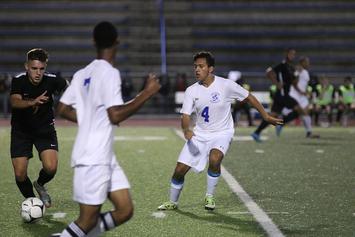 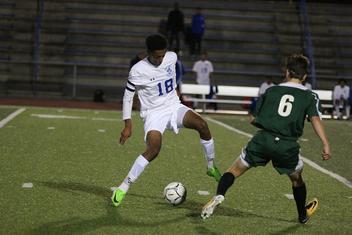 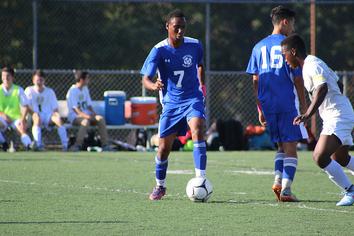 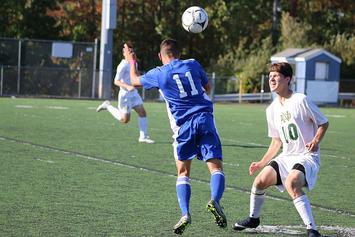 ​Eight games later has not produced a win. The Westies are still searching for their initial victory as they fell 1-0 against the Green Knights Friday evening at Veterans Stadium. The loss dropped West Haven to 0-8-1 on the season.

​Notre Dame picked up the lone goal of the game when Brad Doyle scored from 25 yards out.

With no goals, the results have been obvious. Failing to score once again Tuesday evening, the Westies (0-9-1) were defeated 3-0 against Shelton at Ken Strong Stadium in West Haven.

Shelton took a 1-0 lead in the first half on a goal by Tyler Carvalho at the 20 minute, 37 second mark. Carvalho's goal held up until the Gaels broke the game open in the second half with two more goals.

Saul Novoa made seven saves in the loss for the Westies. The Gaels had a 12-10 shot advantage in the game.

Westies snap losing Skid
WH and Sheehan play to scoreless draw
By MIKE MADERA
Westie Blue
(October 12, 2017) - The losing streak has ended for the West Haven boys soccer team. Unfortunately for the Westies, they still have not picked up a victory.

The Westies, seen here against Shelton, snapped a nine-game losing streak, coming away with a 0-0 draw against Sheehan, October 12, 2017. Photo courtesy Todd Dandelske.

Despite playing well. West Haven settled for a scoreless draw with Sheehan in Wallingford Thursday evening. The tie snapped a nine-game losing skid, and moved the Westies to 0-9-2 on the season.

Still Searching
WH falls to Fairfield Prep
By MIKE MADERA
Westie Blue
(October 16, 2017) - The West Haven boys soccer team is still searching for its first win of the season. A game after snapping a nine-game losing skid, the Westies fell on the road to Fairfield Prep 3-0 Monday afternoon.

Luke Finnegan, Matt Chiota, and Gavin Neumeyer all scored for the Jesuits. Fairfield Prep held a 13-3 shot advantage in the contest.
Saul Novoa made eight saves, and Nash Noble made three in the loss for the Westies.

Senior Sendoff
Westies top NH on Senior Night
By MIKE MADERA
Westie Blue
(October 18, 2017) - In a season where seemingly nothing has gone as planned for the West Haven boys soccer team, something finally went right.

Scoring a pair of late goals, the Westies rallied to top North Haven 2-1 on Senior Night Thursday evening at Ken Strong Stadium in West Haven. With the victory, West Haven improved to 1-10-2 on the year.

The Westies, who look to have done everything in small steps this year, snapping a nine-game losing streak just a pair of games ago, finally got that elusive first win with a goal by a senior and another by a freshman.

Trailing 1-0 on a goal by North Haven's Brian Daley at the 25-minute mark of the first half, the Westies scored twice in the final 5:45 of the game to pull out the win.

Goals by freshman Aldo Barragan at the 74:33 mark and another by senior Malcolm Antoine propelled the Westies to the victory.
Saul Novoa made two saves in the win for West Haven, while Riley Powel made six saves for North Haven. West Haven held an 11-4 shot advantage in the contest.

Westies fall to Hamden
Reeves, Alfazzani score in loss
By MIKE MADERA
Westie Blue
(October 23, 2017) - After dropping a decision against Career/Hillhouse (5-2), the West Haven boys soccer team fell to Hamden 4-2 on the road Monday evening. With the loss, West Haven fell to 1-12-2 on the season.

The Westies never quit and got within 3-2 when Ty Reeves scored 1:28 later, and Alsaddik Alfazzani scored at 30:14.

West Haven could not get any closer as Michael Lanouette scored at the 51:21 mark for the 4-2 final.

Hamden's Anthony Marcus-Carrington made 13 saves as the Green Dragons held a 15-11 shot advantage. 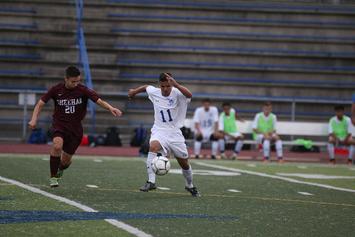 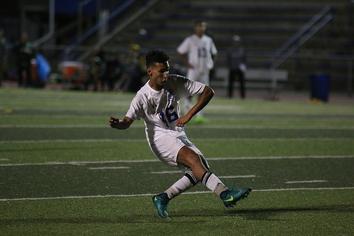 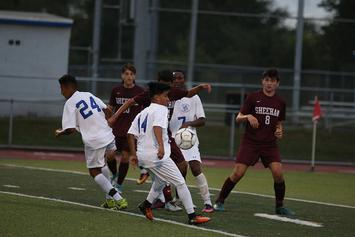 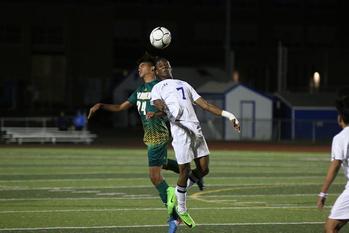 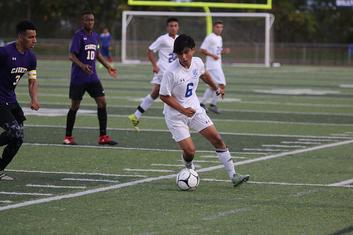 All Knotted Up
Westies scored late goal to tie ND in opener
By MIKE MADERA
Westie Blue
(September 10, 2017) - The West Haven boys soccer team may not have opened the season with a win, but it may have felt like a victory. Trailing late in the contest, the Westies used a goal by Dan Morales to open the season with a 1-1 tie with cross-town rival Notre Dame Saturday evening at Ken Strong Stadium n the season opener for both teams.

In a game which was well-played and scoreless at the half, Notre Dame took a 1-0 lead at the 62:30 mark when Shane Mufarinya scored 22 minutes, 30 seconds into the second half.

That lead held up for just under ten minutes. Off a set piece, Dan Morales got a shot past Notre Dame goalkeeper Rory Schreck to even the game at one.

The game remained that way as neither team was able to score in the final 17 minutes of regulation.

Schreck made three saves in the tie for Notre Dame, while Saul Novoa made six saves for West Haven. ​

Westies fall to Shelton
Rally falls short in 3-2 loss
By MIKE MADERA
Westie Blue
(September 16, 2017) - The West Haven boys soccer team fell to 0-1-1 on the season with a 3-2 loss against Shelton Saturday afternoon in Shelton. West Haven used a pair of late goals to even the contest, but Shelton rallied to pull away for the victory.

The Westies evened the game in the second half on goals by Al Alfanzzani  (42:57) and Matt fFrench (62:18), but Shelton's Khaleed Dawkins scored with 2:10 left in regulation to give the Gaels the victory.
Saul Novoa made 14 saves in the loss for West Haven
​

Titans blank Westies
Sheehan posts 2-0 victory over WH
By MIKE MADERA
Westie Blue
(September 18, 2017) - The West Haven boys soccer team fell to 0-2-1 with a 2-0 loss against Sheehan Monday evening at Ken Strong Stadium. The Westies were unable to find the back of the net despite recording eight shots in the game.

Jason Umbehr scored both goals in the win for the Titans. Sheehan took a 1-0 lead at the 35 minute, 55 second mark of the first half when Umbehr recorded his first tally of the game.

​The opening goal by Umbehr proved more than enough for the Titans. Umbehr iced the game in the second half when he scored at the 76:03 mark for a 2-0 advantage. ​

Saul Novoa made eight saves in the loss for West Haven.

Stifled
Westies blanked by Jesuits 5-0
By MIKE MADERA
Westie Blue
(September 20, 2017) - Fairfield Prep boys soccer coach Ryan Lyddy expected some growing pains this year for a team which saw some new players come into the mix. Through four games, Lyddy may be watching his team skip over that stage.
Behind a dominant defensive effort, and three goals and one assist from Axel Whamond, the Jesuits cruised by West Haven 5-0 in a Southern Connecticut Conference Hammonasset Division contest at Ken Strong Stadium in West Haven Wednesday evening.
“The defensive effort was nice,” Lyddy said. “We have been working on our defense quite a bit. We want to play good, solid defense. We want everyone to understand where they are on the field.”
The Jesuits (3-1) used that defensive effort to put the game away early as they scored twice in the first half, and did not allow a West Haven shot in the first 40 minutes.
That combination was more than enough as Fairfield Prep took a 2-0 lead just 19 minutes into the contest and never looked back. Whamond set up Luke Finnegan for a 1-0 advantage, and Matthew Chiota increased the margin to a pair of goals with 21 minutes remaining in the opening half.
“They are a well-disciplined team,” West Haven coach Chris Cap said. “They beat us to every ball. They did not allow us any room out there.”
Whamond then took over in the second half, scoring all three Fairfield Prep goals. After Whamond was denied one minute into the second half by West Haven goalkeeper Saul Novoa, Whamond needed just three minutes to get on the scoreboard.
Moving in and out of traffic, Whamond gave one last deke to beat Novoa 4:07 into the second half for a 3-0 advantage. Two more goals by Whamond in a span of 1:24 iced the contest.
John Meszaros tipped the ball over to Whamond, who tapped the ball neatly past Novoa for a 4-0 advantage. Whamond’s final tally came with 23:52 to go in the contest as he ripped a shot off an angle into an empty net from 10 yards out.
“The defense did a great job tonight,” Whamond said. “If I need to put the ball in the goal for our team, I will find a way. I will do whatever the team needs.”
Looking for a new identity this year with the graduation of recent stars such as Salah Oumorou, Abdoul Aremu and others, West Haven (0-3-1) was stifled throughout the contest and did not pick up its first shot until 4:45 had passed in the second half when Ty Reeves was stopped in front from 20 yards out.
Matt Ffrench was denied in the final 15 minutes from 25 yards out and Wesley Agyen-Kyei was denied from the same distance as well.
“We have to find our way,” Cap said. “We are trying different formations. We need to find what works for us. We can’t win playing the long ball. We need quick touches. The goals we have allowed this year have been due to mistakes we made. If we fix those mental and physical mistakes, we will be fine.”
Novoa made seven saves in the loss for West Haven.

Still Searching
Westies fall to 0-5-1 with loss to Career/Hillhouse
By MIKE MADERA
Westie Blue
(September 25, 2017) - Following a loss against North Haven in which the Westies scored twice (4-2), the boys soccer team looked as if it was ready to take off. Unfortunately for West Haven, that was not the case.

Behind a pair of second half goals, Career/Hillhouse defeated West Haven 2-0 at Ken Strong Stadium in West Haven Monday evening. The Westies fell to 0-5-1 on the season, having been outscored 17-5 in the process.

​After a scoreless first half, West Haven watched as Career scored twice to pull away. Charles Sakouvogui gave Career a 1-0 lead at the 48-minute mark. Omar Badawi increased the lead to two goals nearly 16 minutes later at the 63:59 mark.

That was all the guests needed as Ethan Silver made 12 saves in goal. Saul Novoa made eight saves in the loss for the Westies.

West Haven held a 15-11 shot advantage in the game.

Hamden stifles West Haven
Westies drop to 0-6-1 with loss
By MIKE MADERA
Westie Blue
(September 30, 2017) - The West Haven boys soccer team continues to look for its first victory of the year. Playing against Hamden, the Westies could not do so in a 4–1 loss at Ken Strong Stadium Saturday evening.

West Haven fell to 0-6-1 with its sixth straight loss of the season.

​Matt Ffrench (7) against Hamden, September 30, 2017. Photo courtesy Todd Dandelske.
Fernando Jimenez scored West Haven’s only goal 27 minutes into the second half off an assist from Matt Ffrench. That goal was too late as Hamden already had scored the first three goals of the contest.
Dayne Rayford scored Hamden’s first two goals, the first at 38:45 and the second at 55:30 for a 2–0 lead. Michael Lanouette scored at 57:20 for a 3–0 lead. Hamden’s Mauricio Bermudez capped the scoring with 2:23 left for a 4–1 laid.

Xavier blanks West Haven
Westies drop seventh straight in shutout loss
By MIKE MADERA
Westie Blue
(October 4, 2017) - If the West Haven boys soccer team is to get going in the 2017 season, it will need to get going offensively.

That did not happen Wednesday evening as the Westies were blanked for the fourth time this season in a 2-0 loss to Xavier at Ken Strong Stadium in West Haven. The loss was West Haven's seventh straight on the year after opening the season with a draw against cross-town rival Notre Dame.

Each team had 10 shots on goal in the game, and junior Nash Noble was solid in goal, but it was not enough in the loss for West Haven. 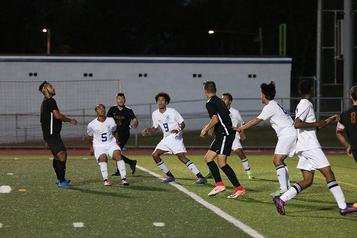 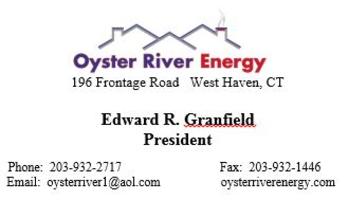 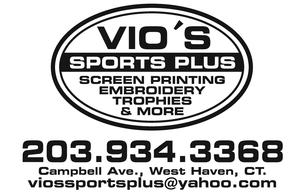