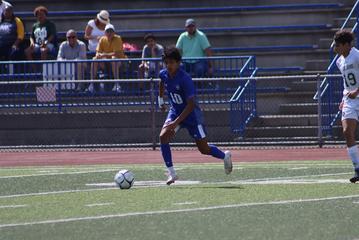 Tied Again
Westies and NDWH play to 0-0 draw in opener
By MIKE MADERA
Westie Blue
(September 11, 2021) - The West Haven boys soccer team was looking to get off to a good start to the 2021 season. Heading into the contest against arch-rival Notre Dame, the Westies knew the Green Knights had a tough defense, having posted a shutout in their opener.

Donaldo Yanez (10) and the Westies played to a scoreless draw against Notre Dame, September 11, 2021. Photo courtesy of Todd Dandelske.

West Haven countered with a top defensive effort, but it was not enough as the two teams played to a scoreless draw Saturday afternoon at Ken Strong Stadium in West Haven. This marked the second straight season the two teams opened with a draw.
West Haven matched the defense of Notre Dame in terms of not allowing a goal as goaltender Brian Carew made three saves in the shutout.
West Haven had his opportunities with 13 shots, but could not dent the back of the goal.

First of the Year

Gazcon, Carew lead Westies
By MIKE MADERA
Westie Blue
(September 14, 2021) - After opening the season with a scoreless draw against rival Notre Dame, the West Haven boys soccer team was looking to pick up the offensive output. The Westies did just that Tuesday when they traveled to Sheehan and topped the Titans 3-1.

Sophomore Rafael Gazcon led the way with a pair of goals as the Westies had 24 shots in the game. West Haven’s defense held Sheehan to just three shots in the contest and senior goalkeeper Brian Carew needed to make just two saves in posting his second shutout of the year.

West Haven got on the board first at the 21:01 mark when senior Brian Rivadera scored off an assist from fellow senior Mubarak Issa. That lead held true until the second half when the Westies scored twice.
Gazcon gave West Haven a 2-0 lead at the 44:03 mark off a penalty kick in what proved to be the decisive goal. Sheehan’s Vinnie Carbone cut the deficit in half, before Gazcon sealed the victory off an assist from Donaldo Yanez with 16 minutes, 13 seconds remaining in the game.

Draw
Westies and Branford play to 2-2 draw
By MIKE MADERA
Westie Blue
(September 17, 2021) - The West Haven boys soccer team moved to 1-0-2 with a 2-2 draw against Branford Friday evening at Ken Strong Stadium in West Haven.
After a scoreless first half, the Westies took a 1-0 lead 14 minutes, 20 seconds into the second half when junior Sebastian Navarro scored an unassisted goal.
Branford evened  the game less than seven minutes later on an own goal by the Westies, before senior Mubarak Issa needed just 5:35 to give the advantage back to West Haven. Senior Donaldo Yanez assisted on the goal by Issa.
Despite holding a 15-7 shot advantage, West Haven could not keep the lead as Branford tied the contest in the final six minutes.

Senior Brian Carew made six saves in the draw for West Haven.

WH blanks Gaels
Yanez, Issa score to lead Westies
By MIKE MADERA
Westie Blue
(September 20, 2021) - The West Haven boys soccer team improved to 2-0-2 with a 2-0 victory at Shelton Monday evening. The win allowed the Westies to remain undefeated early in the season.
The West Haven defense was again stellar, helping goalkeeper Brian Carew post his second shutout of the year. Carew needed to make just one save as West Haven held a 10-3 shot advantage.
West Haven took a 1-0 lead with 2:09 left in the first half as Donaldo Yanez scored off an assist from Victor Lorenzo. The goal by Yanez would hold up as the Westies limited the shots by the Gaels throughout the contest.
Mubarak Issa scored an unassisted goal 10:50 into the second half for a 2-0 advantage.

Rally Time
Westies use late tallies in win
By MIKE MADERA
Westie Blue
(September 21, 2021) - The success of the West Haven boys soccer team continues. After squandering a two-goal lead, West Haven rebounded to defeat North Haven 5-3 Tuesday evening at Ken Strong Stadium in West Haven.
Mubarak Issa scored twice, Daniel Duarte, Donaldo Yanez, and Alan Hernandez each scored once, and Brian Carew made three saves as West Haven improved to 3-0-2 on the year.
Issa gave West Haven a 1-0 advantage with an unassisted goal at the 24:59 mark, before Duarte scored off an assist from Yanez 1:38 later for a 2-0 lead.
North Haven’s Jack Pollard cut the deficit in half 6:04 before the half, then evened the contest 13:44 into the second half.
With West Haven holding an 18-7 shot advantage in the contest, the Westies took the lead for good when Yanez scored off an assist from Brian Rivadera with 8:36 remaining. Issa scored with 5:39 remaining for a 4-2 advantage, before North Haven used a late goal to get the game closer.