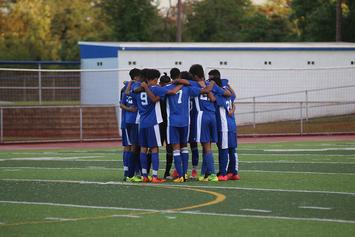 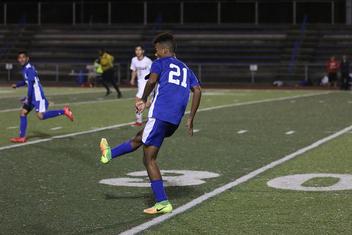 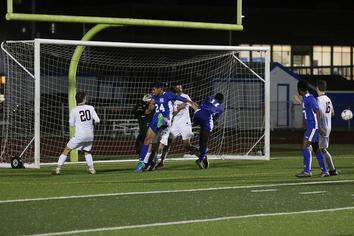 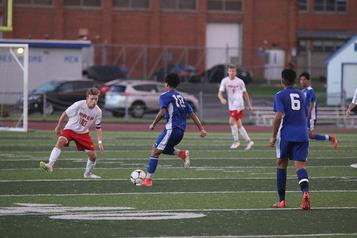 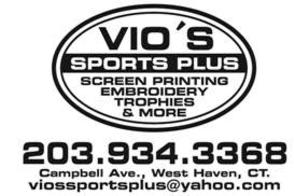 Opening Thriller
Westies score late goal to top ND in opener
By MIKE MADERA
Westie Blue
(September 8, 2018) - One season ago, the West Haven boys soccer team used a late goal to tie Notre Dame in the season opener. Fast forward another year, and late heroics were in store once again.

Trailing 2-1, the Westies scored twice in the final 28 minutes, including the winner with 2 minutes, 14 seconds left in the game for a 3-2 victory over cross-town rival Notre Dame in the season opener for both teams at Ken Strong Stadium Saturday evening.

With the game even at two, West Haven took the lead for good when Aldo Barragan found the back of the net in the final 2:14 for a one-goal advantage.

Barragan's goal came after Matt Ffrench evened the contest at two with 27:58 left in the second half.

Nicholas Vitti had given the Green Knights a 1-0 lead in the first half. before Ffrench knotted the contest late in the opening half.

Notre Dame took a 2-1 advantage when Vitti's second goal came 10:20 into the second half. Ffrench added his second goal a short time later and the game was even at two.

Barragan looked to have an opportunity for an earlier goal, but was turned aside from point blank range by Notre Dame keeper Jay Brennan with less than nine minutes to go. ​

​Trailing early, West Haven never came back in a 3-1 loss to Foran at Ken Strong Stadium in West Haven Tuesday evening. With the loss, West Haven dropped to 1-1 on the year.

Foran (1-0-1) took a 1-0 lead in the fourth minute of the game when Caleb Tondora, scored off assists from Thomas Kummer and Brendan May.

The Lions quickly extended the lead to a pair of goals in the second half as Kummer set up Ben Cogan just six minutes in.

West Haven boys soccer against Foran, September 11, 2018. Photo courtesy of Todd Dandelske.
Matthew Ffrench, who scored twice in the season-opening win for the Westies, got his team on the board when he scored off a penalty kick with 11 minutes to go, but Austin Vance scored in the 73rd minute to restore  a two-goal lead for the Lions.
Joey Buestan Lojano made seven saves for West Haven in the loss, while Luca Marinelli had five saves in the win for the Lions.

West Haven had tied the game earlier in the second half, but Shelton rallied to score twicein a span of 3 minutes, 11 seconds to pull away for the victory.

After Eric Lorent gave the Gaels a 1-0 lead at the 26:48 mark of the first half, West Haven's Alsaddik Alfazzani scored off an assist from Aldo Barragan at the 46:53 mark of the second half to even the contest at one.

Shelton's Zackary Muller scored at 50:10 and 53:21 to give Shelton a lead it never relinquished.

The Gaels had a 13-8 shot advantage in the contest.

The Jesuits scored three times in the first half and never looked back in the contest, out shooting the Westies 25-8.

Fairfield Prep scored early in the contest as Axel Whamond gave the Jesuits a 1-0 lead just 3 minutes 26 seconds in. Jose Garcia Mina made it 2-0 at 8:04 and added another 1:18 later for the 3-0 advantage.

Sheehan nips Westies
West Haven falls 2-1 to Titans
By MIKE MADERA
Westie Blue
(September 20, 2018) - The West Haven boys soccer team dropped its fourth consecutive match with a 2-1 loss against Sheehan in Wallingford Thursday evening. With the loss, the Westies fell to 1-4 on the season.

Xavier tops Westies
West Haven falls 5-1 to Falcons
By MIKE MADERA
Westie Blue
(September 26, 2018) - The West Haven boys soccer team fell to 2-5 with a 5-1 loss against Xavier Wednesday evening. The road loss came after the Westies picked up their second win of the season with a 1-0 victory over Career/Hillhouse.

Westies Sweep ND
WH posts 2-1 victory
By MIKE MADERA
Westie Blue
(October 2, 2018) - Despite the season not starting in impressive fashion, the West Haven boys soccer team is hovering around the .500 mark. Winners of two games in a row and three of the last four, West Haven is in position to get even.

West Haven's latest victory is one to savor. Scoring once in each half, the Westies swept rival Notre Dame with a 2-1 victory at Veteran's Field in West Haven Tuesday evening.

In a game which saw several weather delays, West Haven got goals from Aldo Barragan and Matt Ffrench to post the victory.

Barragan gave West Haven a 1-0 lead 7:36 into the game, and that goal held up at the half.

The Westies took a 2-0 advantage 9:45 into the second half on a goal by Matt Ffrench.

Waiting out the delays and keeping Notre Dame off the scoreboard, West Haven picked up its fourth victory of the season. 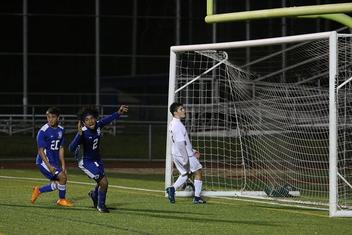 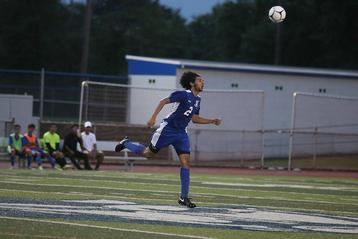 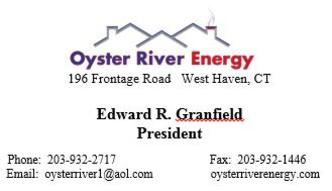 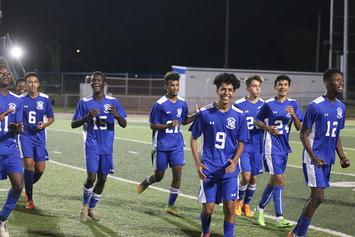 Westies top Sheehan
WH wins fourth out of last five
By MIKE MADERA
Westie Blue
(October 15, 2018) - After a 1-4 start to the season, the West Haven boys soccer team has turned things around.

The Westies are right back in the postseason mix after a 4-2 victory over Sheehan Monday evening at Ken Strong Stadium in West Haven improved their record to 6-6.

​The win over the Titans was West Haven's fourth in its last five games and helped the Westies earn a split with the Titans this year. 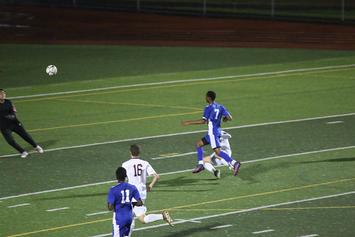 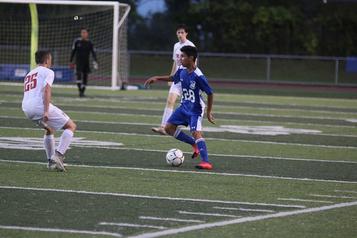 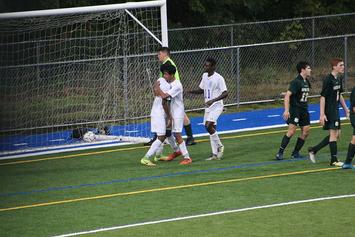 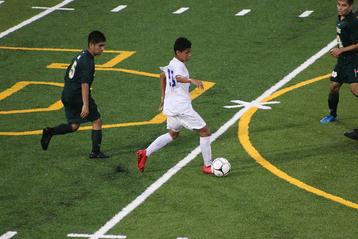 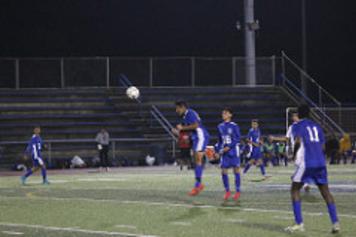