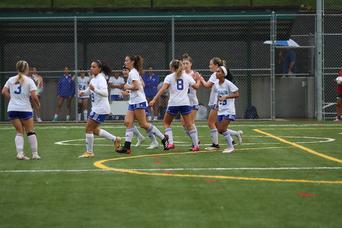 Tsakonas leads Westies
Junior nets hat trick in season opening win
By MIKE MADERA
Westie Blue
(September 9, 2021) - In a shortened season one year ago, the West Haven girls soccer team got off to a quick start, winning five games to open the campaign. Looking to get off to a similar start in 2021, the Westies accomplished the first step.
On the road to play rival Hamden, the Westies used the scoring of junior Julia Tsakonas (3 goals) and the goalkeeping of junior Kassidy Carrano (7 saves) to open the year with a 3-2 victory over the Green Dragons.

The Westies celebrate one of three goals by Julia Tsakonas in a 3-2 win over Hamden, September 9, 2021. Photo courtesy of Todd Dandelske.
"Overall, it is a great way to start the season,” West Haven coach Pete Trenchard said. “We got the win away from home against a strong team. Julia (Tsakonas) was on fire, getting the hat trick. She always finds a way to get the ball into the back of the net. Kassidy (Carrano) had some big saves to preserve the win for us."
Tsakonas scored twice in the opening half and added the eventual winner in the second half. West Haven had 12 shots in the contest.
Tsakonas got the Westies on the board when she scored off an assist from Emma walker at the 24:21 mark. The junior’s second goal came at the 39:08 mark off an assist from senior Cori Severino.
West Haven scored the eventual winner 13:22 into the second half as Tsakonas netted her third of the game off an assist from Maya Bermudez.
The rest was up to Carrano, who held off Hamden with seven saves.

Squared Up
Westies and Hornets play to scoreless draw
By MIKE MADERA
Westie Blue
(September 14, 2021) - After opening the season with a road victory over Hamden, the West Haven girls soccer team was looking for a victory in its home opener. While the Westies did not post the win, they did come away with a scoreless draw against Branford at Ken Strong Stadium in West Haven Tuesday evening.

West Haven played to a scoreless draw against Branford, Tuesday, September 14, 2021. Photo courtesy of Todd Dandelske.
West Haven (1-0-1) had its opportunities with five shots in the game, but the Westies could not find the back of the net.
“Ariana Izzo played well in the midfield, while CeCe Williams, Grace Nowak, and Ava Murphy were solid on defense,” West Haven coach Pete Trenchard said. “Emma Walker, Julia Tsakonas, Cori Severino, and Maya Bermudez worked hard throughout the game to set up chances on Branford's goal. "
Junior Kassidy Carrano was stellar in goal for West Haven as she turned aside all nine Branford shots to preserve the shutout.
"Overall we played well,” Trenchard said. “It was a back and forth, aggressive game. The girls held strong and worked to the very end. We forced them to take a lot of shots from outside that were easy for Kassidy (Carrano) to grab.”

Blanked
Mercy tops Westies 1-0
By MIKE MADERA
Westie Blue
(September 17, 2021) - The West Haven girls soccer team moved to 1-1-1 with a 1-0 loss at Mercy Friday afternoon. Despite Kassidy Carrano making nine saves, the Westies were unable to get going on offense in their first loss of the year.
The game started particularly slow for west Haven and the team could not find a flow to the contest. Turnovers and loose balls went to Mercy, before West Haven picked up its play in the second half.
"We started slowly and didn't play our best soccer in the first half,” West Haven coach Pete Trenchard said. “We gave the ball away too easily and got beat to 50-50 balls. In the second half, we were much better and created some chances. We just couldn't get that tying goal."
West Haven finished the game with just five shots.

Draw
Westies and Guilford play to 1-1 decision
By MIKE MADERA
Westie Blue
(September 21, 2021) - Traveling to Guilford to play a tough soccer program is never an easy task. Coach Pete Trenchard can appreciate how his girls played Tuesday evening.
Holding a tough Guilford squad to just seven shots, West Haven came away with a 1-1 draw to move to 1-1-2 on the year.
"It is always good to walk out of Guilford with any points,” Trenchard said. “They had the edge on us in the first half, but we were much stronger in the second. Maddy's (Lentine) goal was gorgeous, a free kick from about 30 yards out after Julia Tsakonas drew a foul. Overall, it is a good result and hopefully we can build on this as we head into our next game on Thursday."
With just five shots in the game, West Haven made the most of those opportunities when Madison Lentine scored a brilliant goal off a free kick at the 60:18 mark.
West Haven could not hold on as Guilford scored with 14 minutes to go to force the even game.

Kassidy Carrano finished with six saves in the draw. 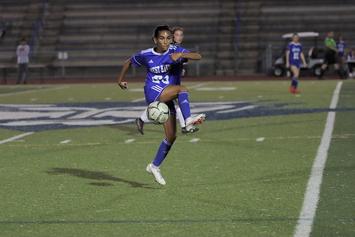