Westie Sharks loaded for 2021
Depth and talent keys to successful season
By MIKE MADERA
Westie Blue
(February 1, 2021) - Less than a minute. That was all the time left, 33 seconds to be exact, for the West Haven-Sacred Heart Academy girls hockey team to force overtime in the opening round of the state tournament last season at East Catholic.
A late goal by East Catholic foiled the season for the Westie Sharks right before the global pandemic hit. With winter sports back on the schedule, sixth-year coach Erin Blake and her squad are ready to get going once again.
“I am excited for the girls to get back on the ice,” Blake said. “They know how lucky they are to get the chance to play. Everyone is working harder than ever and skating each day like it is their last. We lost four seniors who were a huge part of our team, but we have high hopes for another successful season.”

Mackenzie Gardner (16) and the Westie Sharks are ready to go in 2021. Photo courtesy of Todd Dandelske.
Despite the loss to graduation of all-everything players Taylor Nowak (over 100 career goals), Brooke McNabola and Megan Froehlich (over 100 career points), the Westie Sharks have plenty to like about the upcoming season.
With starting goaltender and now junior Grace Nowak out with a knee injury last year, Blake and her staff were able to develop junior Hannah Davey and senior Hailey Alfano in goal. Both played well and now Blake can use any of the three between the pipes this year in what is now a loaded position.
“We are really happy Grace (Nowak) is back and healthy this season,” Blake said. “She has not skipped a beat. We have three great goalies to start the season. Hannah and Hailey worked hard in the offseason. We are happy where we are at.”
The Westie Sharks will be led this year by senior captains Mackenzie Gardner and Jenna Hunt, and senior alternate captains Jianna Cohrs, Mia Celentano, and Hailey Alfano.
“I like the communication on the ice,” Blake said. “So far, the seniors have led by example with each line and drill. They are all giving 110%. We talked about playing every game and practice like it was their last.
“We know we have lost some key players. We need everyone to step up and fill the void. I am proud of their effort.”
Gardner, a two-year starter, will anchor the team at the blue line. The senior had 20 blocked shots and put up 17 points a season ago. Junior Meghan Dupre will also be a key player on defense for the Westie Sharks as she recorded 17 blocked shots a season ago.
Dupre looks to play alongside freshman Julianna Montano, while Gardner will play alongside another strong freshman in Taylor Alfano. Sophomores Emilee DeGrand and Anne Plunkett will also see time on the defensive side.
Hunt. Cohrs and Celentano will be the go-to players on offense for Blake, forming one of the best scoring trios in the area. Hunt had 44 points last season, Cohrs had 33, and Celentano contributed 23 as a junior. Cohrs was a 2019 All-SCC Second Team selection.
With plenty of depth, Blake and her staff have the ability to move players around. Blake will also have the ability to have players play junior varsity and varsity. Looking to create balance on the offensive side, Blake may be moving girls to find the right fit.
Celentano and Cohrs will likely team up with junior Maya Boyhen to form a solid trio, while Hunt will have a nice compliment of players, including Plunkett and freshman Geena Montano. Junior Caitlin Welch, DeGrand and freshman Ashley Welch will also form another solid offensive line.
“We have balance to fill some big voids,” Blake said. “We have such good kids. They are respectful. They go out of their way to be polite and helpful.
“Honestly, I have been so impressed, especially with the seniors. They have not complained once. They are so happy to be on the ice. They have a chance to play, even if it is a shortened season.”

The Westie Sharks open the year Tuesday, February 9 at the Edward L. Bennett Rink against Masuk-Barlow at 5:15 p.m. Details regarding fan attendance will be announced soon.

Westie Sharks win Opener
Nowak, Hunt lead way in victory over NDFF
By MIKE MADERA
Westie Blue
(February 13, 2021) - The West Haven/Sacred Heart Academy girls hockey team was eager to get on the ice to start the 2020-2021 season. Not only were the Westie Sharks looking to wash that vision of an early postseason exit from a year ago away, they also were looking to make a new name for themselves.
Behind 17 saves from junior Grace Nowak and a pair of goals from senior Jenna Hunt, West Haven/Sacred Heart Academy opened the year with a 3-0 victory over Notre Dame of Fairfield Saturday evening at the Milford Ice Pavilion. Nowak was returning in goal after suffering a knee injury a season ago.
“I am happy with the way the girls played and proud that they worked hard for the win,” West Haven/Sacred Heart Academy coach Erin Blake said. “They were able to shake the first game nerves after the first period, gain composure, and play their game. It was a full team win. Grace (Nowak) did an amazing job with her first game back in net and our freshman are meshing perfectly into our rotation.”
The Westie Sharks rode the play of Nowak, who had seven saves in the first period, then made 10 saves over the final two periods. With Nowak and the West Haven defense controlling the front of the net, the Westie Sharks had a chance to get going offensively.
After a scoreless first period, freshman junior Maya Boyhen took a pass from senior Jianna Cohrs and gave West Haven/Sacred Heart Academy a 1-0 lead with 3:02 gone in the second period.
That lead would last until the third period when Hunt struck twice. Hunt gave West Haven a 2-0 lead 1:56 into the third off assists from sophomore Anne Plunkett and freshman Geena Montano, before Hunt scored into an empty net with 13 seconds to go with an unassisted tally.  “Maya Boyhen got us started with a beautiful pass from Jianna Cohrs for the first goal, and Jenna Hunt came to play, adding two goals and stepping up to secure the win,” Blake said.

Grace Nowak (35) and WH/SHA improved to 2-0 with a 4-1 victory over Amity/North Haven/Cheshire, February 16, 2021. Photo courtesy of Todd Dandelske.
The Westie Sharks continued to play solid defensively, allowing just 20 shots in the game and surrendering their first goal of the season. Grace Nowak followed her shutout in the season opener with another solid performance, making 19 saves in the win.
“It was an entire team effort,” West Haven/Sacred Heart Academy coach Erin Blake said. “They (Blades) are always one of our biggest games of the season, and the girls came ready to play with a tough Blades team. Everyone had a hand in our scoring tonight with Mackenzie's (Gardner) strong shot off the point to get us on the board. The girls rallied behind that goal the rest of the game.”
The Westie Sharks never trailed in the contest and took a 1-0 lead 5 minutes, 52 seconds into the second period when Mackenzie Gardner scored from the point off an assist from Emilee DeGrand. WH/SHA increased the lead to 2-0 with 4:54 remaining in the middle period as Mia Celentano scored off an assist from Maya Boyhen.
DeGrand increased the lead to 3-0 just 2:20 into the third with an unassisted tally, before the Blades got on the board with 2:27 remaining to get within 3-1.
That was as close as the game would get as Anne Plunkett scored off assists from Jenna Hunt and Geena Montano 40 seconds later.

“Each line worked hard and played together,” Blake said. “Our defense and Grace (Nowak) in net played extremely well.”

Jenna Hunt and WH/SHA improved to 3-0 as the Westie Sharks topped Hand/Coginchaug, February 20, 2021. Photo courtesy of Todd Dandelske.
The Westies controlled play from the start, leading 4-0 after one period of play and never looking back. The Westie Sharks held a 67-4 shot advantage in the contest as Hailey Alfano made four saves in the shutout win. Megan Hart made an amazing 60 saves in goal for Hand/Coginchaug.
Jenna Hunt led the Westie Sharks with two goals, while Juliana Montano and Mackenzie Gardner each finished with a goal and an assist.
West Haven/Sacred Heart Academy took a 2-0 lead early in the first on a pair of goals 20 seconds apart. Jianna Cohrs opened the scoring off an assist from Montano 3:23 in, before Gardner increased the lead to 2-0 off an assist from Hailey Alfano.
Hunt increased the lead to 3-0 with 1:38 remaining in the opening period, before Montano scored the fourth goal one minute later.
The Westie Sharks used an unassisted goal by Hunt in the second period for a 5-0 lead, before WH/SHA closed the contest with two goals in the third period.Caitlin Welch scored off assists from Emilee DeGrand and Gardner 7:49 in, before the lead increased to 7-0 on a goal by Chase Ireland off assists from Geena Montano and Melissa Tsakonas.

Westie Sharks top Guilford
Cohrs, Boyhen, Nowak lead way in 5-3 victory
By MIKE MADERA
Westie Blue
(February 20, 2021) - Some things you just do not forget. That was the case for the West Haven / Sacred Heart Academy girls hockey team Tuesday afternoon.
After suffering three losses to Guilford a season ago, two in gut-wrenching fashion and the other in the Southern Connecticut Conference tournament, the Westie Sharks were out to erase those memories.

WH/SHA celebrates its victory over Guilford, Tuesday, February 23, 2021. Photo courtesy of Todd Dandelske.
Behind two goals from Jianna Cohrs, a goal and three assists from Maya Boyhen, two assists from Mia Celentano, and 34 saves from Grace Nowak, the Westie Sharks defeated Guilford 5-3 in an away game at the Edward L. Bennett Rink.
“The girls played with heart tonight,” WH/SHA coach Erin Blake said. “I could not be more proud of each and every one of them. They came ready to play and left it all on the ice. What more can a coach ask for? Guilford is a strong team. We knew that from last year. We knew it would be a tough game.”
The Westie Sharks trailed early in the game as Madison Epke went the length of the ice before her shot was turned aside by WH/SHA goaltender Grace Nowak. The rebound went to Sofia Cuozzo to give Guilford a 1-0 lead 3:02 into the game.
WH/SHA needed just 1:44 to respond and scored the next four goals for a 4-1 lead. Cohrs got things started off a scramble in front to even the game at one, with assists going to Boyhen and Celentano.
The same trio was at it again 2:19 into the second period as Cohrs gave the Westie Sharks a 2-1 advantage off assists from Boyhen and Celentano.
Anne Plunkett needed just 1:33 to extend the lead to 3-1 off assists from Boyhen and Meghan Dupre, before Boyhen closed the second period scoring with 2:11 remaining off an assist from Dupre.
While the offense was clicking with 20 shots in the middle period, the defensive effort of the team was just as solid. Nowak made 11 saves in the middle period as the defense helped by blocking shots and pushing the play outside.
“Grace (Nowak) was phenomenal in net and our defense was blocking shots left and right,” Blake said. “The forwards were aggressive in front of the net to get us on the scoreboard. I really can't say enough about our girls. They have the heart, sportsmanship, and the team-before-me mentality that makes me so proud to be their coach.”
Goals by Cuozzo and Epke started the third period for Guilford to cut the WH/SHA lead to 4-3, but Jenna Hunt came through in a big way with an unassisted goal with four minutes to go for a 5-3 advantage.

Nowak finished with 34 saves in the victory. 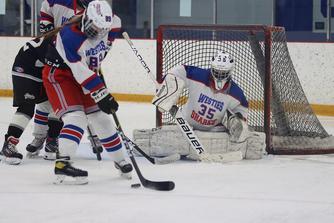 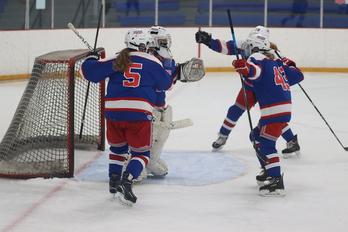 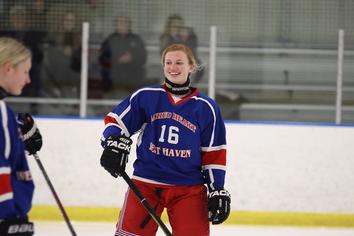 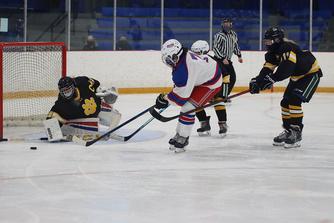