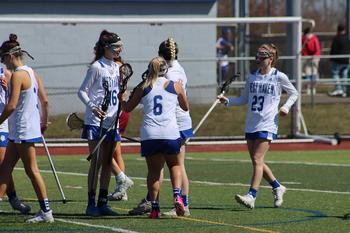 ​​​Westies fall to North Haven in opener
WH drops late 7-5 decision
By MIKE MADERA
Westie Blue
(April 2, 2022)  - The West Haven girls lacrosse team opened the season with a 7-5 loss against North Haven at Ken Strong Stadium in West Haven Saturday afternoon. Despite a valiant effort, the Westies were hurt by two late goals in the defeat.

Amber Militrano made 16 saves in the loss. The Westies had five different players in the scoring column as Olyvia O’Mara and Julia Tsakonas each led the way with a pair of goals. Caitlin Welch also scored once. Melissa Tsakonas added three assists and Madison Lentine also picked up a helper in the season opener.

​​​Westies fall to Hamden
WH drops 11-8 decision
By MIKE MADERA
Westie Blue
(April 5, 2022)  - The West Haven girls lacrosse team fell to 0-2 with an 11-8 loss against Hamden at Ken Strong Stadium in West Haven Tuesday evening. Despite leading 6-5 at the half, the Westies could not pull out the victory.
"We are still in the learning stages of the season,” West Haven coach Joanne Trenchard said. “There are still areas we need to focus on, but we are seeing improvements day by day.  Despite our two losses, we have been in both games and are showing promise for the rest of the season"
Amber Militrano made nine saves in the loss, while her counterpart from Hamden Payten Webb finished with 20 saves.
Melissa Tsakonas led the offense with three goals and an assist, Cassidy Dalton and Olyvia O’Mara each had a pair of goals, and Julia Tsakonas added a goal.

Initial Victory
WH tops Jonathan Law
By MIKE MADERA
Westie Blue
(April 8, 2022)  - The West Haven girls lacrosse team picked up its first victory of the season and improved to 1-2 with a 10-3 victory over Jonathan Law Friday afternoon in Milford. The Westies led 4-3 at the half and put the game away with a 6-0 second half run.
"After a rough start to the game, the team was able to regroup and control the momentum of the game,” West Haven coach Joanne Trenchard said. “Madison Lentine and Brooke Moscato helped to keep pressure on during transition and control the offense. Ava Evangeliste, Ava Boano, and Emma Walker helped to keep Law scoreless in the second half."
Olyvia O’Mara and Julia Tsakonas each scored three goals, Cassidy Dalton scored twice, and Emma Walker added a pair of assists. Madison Lentine had a goal and an assist in the win, while Melissa Tsakonas scored once.
West Haven held a 42-7 shot advantage in the contest. Amber Militrano made four saves for West Haven in the win.

Westies fall to Stratford
WH falls 18-5
By MIKE MADERA
Westie Blue
(April 9, 2022)  - Just one game after picking up its initial victory of the season, the West Haven girls lacrosse team fell to Stratford/Bunnell 18-5 at Ken Strong Stadium in West Haven Saturday morning. With the loss, the Westies dropped to 1-3 on the year.
Stratford/Bunnell took control of the game in the first half, taking a 14-1 lead and never looking back. Mariana Trovarelli led Stratford/Bunnell with five goals and an assist, while Gwyneth Estrella scored five times.
Delaney Johnston led the Westies with three goals, while Melissa Tsakonas had a goal and two assists. Brooke Moscato scored once, Olyvia O’Mara added an assist, and Amber Militrano made four saves in the loss.

​​​Westies tops Lyman Hall
Balanced attack leads to 10-9 win
By MIKE MADERA
Westie Blue
(April 12, 2022) - The West Haven girls lacrosse team improved to 2-3 with a 10-9 road victory over Lyman Hall Tuesday evening. The Westies led 7-2 at the half and held on for the win.
"West Haven came out strong in the first half and controlled the momentum of the half,” West Haven coach Joanne Trenchard said. “Lyman Hall came out aggressive in the second half, leading to strong play on defense by Maddie Molster and Ava Boanno. Delaney Johnston and Olyvia O'Mara both had control of the ball on offense to help lead to the win."
Olyvia O’Mara led the Westies with four goals and an assist, while Delaney Johnston, Melissa Tsakonas, and Madison Lentine each scored twice. Lentine and Ava Evangeliste each finished with a pair of assists.

Amber Militrano made eight saves in the win.

​​​Westies run past Shelton
Johnston scores 4 in 11-7 win
By MIKE MADERA
Westie Blue
(April 14, 2022) - The West Haven girls lacrosse team won its second game in a row and third of the year with an 11-7 decision over Shelton on the road Thursday afternoon. With the win, the Westies improved to 3-3 on the year.
Amber Militrano led the way with 20 saves in goal for West Haven as the Westies led 7-3 at the half.
"Amber Militrano set the tone for the game with a strong showing in the net,” West Haven coach Joanne Trenchard said. “The girls moved the ball well down the field and in our offensive zone to create goal-scoring chances. The movement allowed for five different goal-scorers, showing the growth of our team."
Delaney Johnston led West Haven with four goals and two assists, while Olyvia O’Mara had two goals and two assists. Brooke Moscato scored twice, and Melissa Tsakonas and Ava Evangeliste each added tallies.

Cassidy Dalton and Emma Walker each had two assists in the win.

​Foran tops Westies
Late goals fall short in 16-10 loss
By MIKE MADERA
Westie Blue
(April 19, 2022) - The West Haven girls lacrosse team saw its two-game winning streak come to an end with a 16-10 loss against Foran at Ken Strong Stadium Tuesday evening. With the loss, West Haven fell to 3-4 on the year.
Foran took control of the game early with an 11-3 halftime lead, before the Westies rallied in the second half. The comeback fell short despite six different players in the scoring column.
Julia Tsakonas led the Westies with four goals. Delaney Johnston scored three times, Olyvia O’Mara scored twice, and Madison Lentine had a goal and an assist. Cassidy Dalton and Melissa Tsakonas each had an assist for West Haven.
Amber Militrano had 18 saves in the loss as West Haven was outshot 38-21.Mackenzie Posey led Foran with four goals and three assists, while Mia Williams and Celidgh Pikul each had four goals and an assist. Mallory Janik added three goals and an assist, and Rylie Bryant made seven saves in the win for Foran.

​Sudden Loss
Sheehan rallies to top Westies 9-8
By MIKE MADERA
Westie Blue
(April 20, 2022) - The West Haven girls lacrosse team is getting used to playing in tough contests. Wednesday evening was no different.
Despite leading by two goals at the half, the Westies fell to Sheehan 9-8 in overtime at Ken Strong Stadium. With the loss, the Westies fell to 3-5 on the year.
West Haven led 6-4 at the half, but saw the Titans rally in the second half. A 4-2 Sheehan margin forced overtime, where the Titans prevailed.
"Sheehan and West Haven both played aggressively, making ball possession a key factor in the game,” West Haven coach Joanne Trenchard said. “Emma Walker, Maddie Molster  and Caitlin Welch helped to lead the defense against Sheehan's offense. Despite our hard work, Sheehan was able to get the win in overtime."
Olyvia O’Mara, Delaney Johnston, Melissa Tsakonas, and Julia Tsakonas each scored twice in the loss. O’Mara, Johnston, Madison Lentine, and Julia Tsakonas each had one assist in the loss for West Haven.Bella Raffone led Sheehan with three goals and two assists.

Mercy rallies past Westies
West Haven falls 11-8
By MIKE MADERA
Westie Blue
(April 20, 2022) - The West Haven girls lacrosse team dropped its third straight contest and fell to 3-6 on the year with an 11-8 loss against Mercy Monday evening at Ken Strong Stadium in West Haven. The Westies led 6-4 at the half, but could not hold on as the Tigers went on a 7-2 second half run to pull out the victory.
"We were slow to start and got caught flat-footed a few times in the beginning of the game,” West Haven coach Joanne Trenchard said. “We didn't apply the pressure consistently that we needed to in order to keep control of the game. Julia Tsakonas and Ava Evangeliste worked hard throughout the midfield, but we could not fit all the pieces together tonight.”
The Westies had 37 shots in the contest, but only managed to find the back of the net eight times. The Tigers capitalized on their 27 shots and were led by Lily Schoonmaker with eight goals and one assist.
Amber Militrano made 14 saves for the Westies, while Callia Borkowski made 17 saves in the win for Mercy.
Julia Tsakonas led the offense with three goals, while Melissa Tsakonas finished with a goal and an assist. Olyvia O’Mara, Ava Evangeliste, and Delaney Johnston all finished with one goal apiece.

Westies rally past Law
West Haven prevails 10-9
By MIKE MADERA
Westie Blue
(May 3, 2022) - The West Haven girls lacrosse team snapped its four-game losing streak with a 10-9 victory over Jonathan Law Tuesday evening at Ken Strong Stadium in West Haven. The comeback victory allowed the Westies to improve to 4-7 on the year.
"The girls played well and worked together to earn this win,” West Haven coach Joanne Trenchard said. “Coming from behind, we focused on the basics that we have been working hard on.  Maddie Molster and Emma Walker both played a strong defensive game to slow down Law. Madison Lentine, Ava Evangeliste and Julia Tsakonas helped control the transition. Goals scored by six different players showed our depth on offense today."
West Haven trailed 5-1 at the half, before rallying with a 9-4 advantage in the second half. Julia Tsakonas led the way for West Haven with three goals, while Olyvia O’Mara and Brooke Moscato each scored twice.
Moscato also added an assist, while Emma Walker and Delaney Johnston each had a goal and an assist, and Cassidy Dalton had two assists.
Chloe Konareski scored three times for Law, while Joe Johnson had two goals and two assists, and Lindsay Konlian scored twice.
West Haven held a 36-16 shot advantage in the contest. West Haven’s Amber Militrano made nine saves in the win.