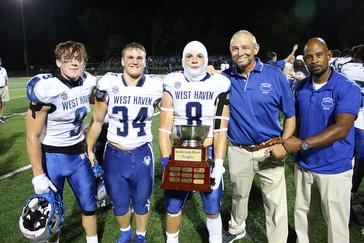 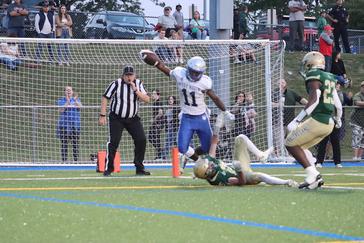 Best of the West
Westies roll past NDWH 25-8
By MIKE MADERA
Westie Blue
(September 9, 2022) - Armani Reid loves his teammates. The feeling is mutual for the first-year Westie.
Behind his long returns on special teams, Reid set the tone of the game early as West Haven rolled to a 25-8 victory over cross-town rival Notre Dame in a Southern Connecticut Conference contest at Veteran’s Field in West Haven Friday evening.
“We knew we had to do what we had to do,” Reid said. “I thought the runs helped with the momentum of the game. We had to get the jitters out. It doesn’t matter who does what. We do it as a team.”
West Haven’s victory secured the Soderman Bowl title for the second straight season, and it was also West Haven’s fourth in five years played as COVID took away the 2020 season.
While all eyes were on the West Haven offense to set the tone, it was the special teams and defense of the Westies which rose to the occasion early on. The play of the two groups set up Nick Conlan and company for 25 first half points.
After West Haven held on downs to start the contest, Reid ‘s long punt return gave the Westies possession at the Notre Dame 20. Six plays later, Deven Robinson ran in off the right edge from 10 yards out for a 6-0 West Haven lead with 6 minutes, 43 seconds remaining in the opening quarter.
“We have two great punt returners back there,” West Haven coach Rich Boshea said. “That return definitely set the tone of the game. I think our punt return team will be a weapon all year.”
The Westies then held Notre Dame again on its next possession and limited the Green Knights to just 38 yards of offense in the opening quarter.
“I think our secondary did a good job and our defensive line did a pretty good job,” Boshea said. “We put pressure on. We have basically four linebackers back and I think they all did a good job in that first half. (Notre Dame quarterback Matthew) Piechota is a very dangerous quarterback and we kept them in check.”
West Haven mixed its offense in the backfield and took a 12-0 lead on its third possession of the game when a 51-yard drive was capped when Jahzier Massey scored from one yard out with 8:27 left in the opening half.
While the Green Knights were down a pair of scores, they had ample opportunities to get back in the game. A golden opportunity was missed on fourth down when Piechota hit an open receiver for an apparent first down, but the pass could not be handled.
“We stunk in the first half,” Notre Dame coach Joe DeCaprio said. “There are no if and or buts about it. Special teams gave them their first drive. We can’t score. Our offense is the key. I thought our defense, believe it or not, especially in the second half, played well. I’m disappointed in our offensive performance. Six penalties on one drive. We had at least four dropped balls. We made too many mistakes to beat a team like West Haven.”
West Haven needed 10 plays to go 77 yards, capped by a Conlan to Aeden Coe 46-yard scoring strike with 1:12 remaining in the half for a 18-0 advantage.
“Teams aren’t used to West Haven throwing the ball,” Boshea said. “They might have to start getting used to it a little bit.”
With the Westies dominating the half, the Green Knights had another opportunity, but Piechota was intercepted by Avian Evans with 1:06 remaining in the half.
Just 22 seconds later, Conlan, who completed four passes for 89 yards and two scores in the opening half, hit Teriq Mallory for a 13-yard scoring strike and a 25-0 lead following the extra point by Raul Sanchez.
“They were big,” Conlan said of the two late scores. “We knew coming into the game we had to start off early and punch them in the mouth and that is exactly what we did. This is a huge win. We had to come out and show everyone we are not playing around and we are really going for a ring this year.”
Notre Dame was a different team in the second half as it used a safety and a 23-yard scoring strike from Piechota to Matteao Petruzziello to get within 25-8 with 8:09 remaining in the game.
The Green Knights, who out gained West Haven 154 to -1 in yards up to the touchdown, recovered the onside kick and were in striking distance once again. The next score never came to fruition as West Haven held on downs, then ran out the clock.Conlan finished with 105 yards passing and two touchdowns in the win for West Haven. Piechota finished 18-of-32 for 214 yards. He had an interception and also a touchdown pass in the loss.

Cruise Control
Westies run past Amity
By MIKE MADERA
Westie Blue
(September 16, 2022) - The West Haven football team improved to 2-0 with a dominant 59-14 victory over Amity in the home opener Friday evening at Ken Strong Stadium. The Westies used a balanced attack to cruise to the 45-point victory.
Nick Conlan was 7-of-8 in the air for 111 yards and three touchdowns, while Deven Robinson ran for 107 yards on four carries, Rui DaSilva ran for 70 yards, Jeremiah Francis ran for 59 yards, and Jah’zire Massey ran for 55.
The Westies got going on offense quickly in the contest, taking a 20-7 lead after one quarter. Francis gave the Westies a 7-0 lead with a 35-yard score, before Amity evened the game at seven.
That would be as close as the Spartans would get as West Haven scored the next 19 points to pull away. Robinson scored the first of his three touchdowns on a 38- yard run for a 14-7 lead, and Conlan hit Teriq Mallory for a 31-yard scoring strike and 20-7 advantage at the end of the first quarter.
When Conlan connected with Demarco Eady for a 54-yard touchdown pass early in the second, the lead was 26-7. Amity’s second touchdown pass of the game brought the Spartans within 26-14, but it was all West Haven after that.
Robinson scored on a 36-yard run, Massey ran in in from 11 yards out, and Conlan threw his third touchdown pass of the game, a 3-yard pass to Robinson right before the half for a 46-14 advantage.

Westies top Guilford
WH improves to 3-0 with 47-20 victory
By MIKE MADERA
Westie Blue
(September 23, 2022) - The West Haven football team is off to a quick start in the season. While Friday evening started slowly, the Westies rolled to a 47-20 victory over Guilford at Ken Strong Stadium in West Haven.
After failing to get on the scoreboard in the first quarter, West Haven (3-0) took an 18-0 lead in the second quarter, before rolling to a 34-13 lead after three. Deven Robinson and Demarco Eady each scored twice in the victory.
Robinson used a 5-yard run to give West Haven a 6-0 lead, before quarterback Nick Conlan connected with Eady for a 45-yard scoring play and a 12-0 advantage. When Trevor Tompkins ran in from five yards out, the Westies held an 18-0 lead.
Guilford made things interesting with a late touchdown in the second quarter and got within 18-13 on the first score of the third quarter, but the Westies pulled away, scoring the next two touchdowns in the third and going on a 29-0 run.
Robinson’s one-yard run and the two-point conversion from Tompkins put West Haven on top 26-13, before Eady used a 44-yard punt return, coupled with Conlan’s pass to Avyon Graham on the conversion for a 34-13 advantage.

West Haven iced the game to start the fourth quarter when Armani Reid scored on a 38-yard strike from Conlan, before Jah’zire Massey scored on a 34-yard run for a 47-13 lead. 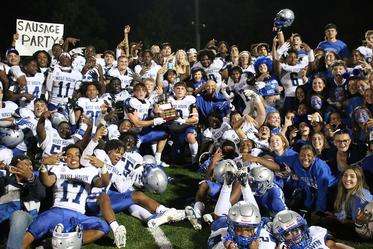 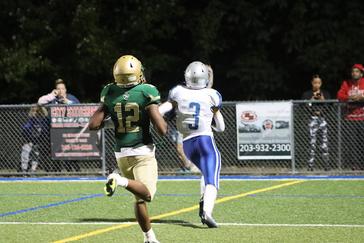