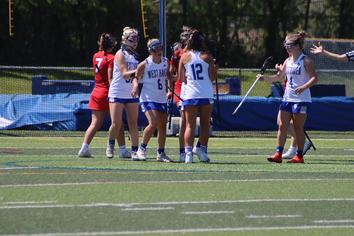 ​​​Westies fall to Law in opener
Law tops WH 20-15
By MIKE MADERA
Westie Blue
(April 10, 2021)  - The West Haven girls lacrosse team opened the 2021 season with a 20-15 loss in Milford against Jonathan Law Saturday afternoon. Five different players picked up goals, but it was not enough in the loss for the Westies.

Olivia O’Mara led the way for West Haven with eight goals, while Mackenzie Gardner scored four times. Meghan Dupre, Ava Evangeliste, and Emma Walker each scored once in the loss.
“Despite being a young team, the girls have worked tirelessly to improve their skills on and off the ball,” West Haven coach Joanne Trenchard said. “We continue to grow as a team everyday, and I am proud of all of their hard work on the field.”
Law had four players with three goals or more in a contest which featured numerous scoring opportunities for both teams. Law had 24 shots, with sophomore Nasia Hammac and freshman Olivia Trenchard each making two saves.
West Haven finished with 28 shots in the game.

Westies fall in Home Opener
Law tops WH 7-6
By MIKE MADERA
Westie Blue
(April 13, 2021)  - After opening the season with a loss on the road against Jonathan Law, the West Haven girls lacrosse team had a chance to avenge that defeat in quick fashion. Unfortunately for the Westies, they fell just short.
Despite three goals from Olyvia O’Mara, West Haven dropped to 0-2 with a 7-6 loss to Law in the home opener for the Westies at Ken Strong Stadium.

West Haven celebrates a goal against Jonathan Law, April 13, 2021. Photo courtesy of Todd Dandelske.
"We did not play our best tonight,” West Haven coach Joanne Trenchard said. “There were moments that could have gone in our favor, but we did not take advantage of those opportunities."
West Haven had its chances to get on the scoreboard, but could not find the back of the net. Law goalie Arlene Bunavong also had something to say about that as she made 16 saves in the win for Law.
West Haven also saw Law’s Jordyn Konlian score three times, and Lindsay Konlian and Maya Rosado each score twice.For the Westies, sophomore Cassidy Dalton, junior Madison Lentine and sophomore Brooke Moscato each scored once. Freshman Amber Militrano made 11 saves in the loss for West Haven.

Lyman Hall tops Westies
Westies fall 8-3
By MIKE MADERA
Westie Blue
(April 16, 2021)  - The West Haven girls lacrosse team fell to 0-3 with an 8-3 loss at Lyman Hall Friday evening. With the game even at three, Lyman Hall pulled away with five goals in the second half to send West Haven to its third loss of the year.
"This was a frustrating loss,” West Haven coach Joanne Trenchard said “We were down some key players, but we did not capitalize on opportunities during the game. Amber Militrano had some key saves for us. Our defense stepped up with Ariana Izzo and Julia Tsakonas being important in our transition up the field."
Melissa Tsakonas, Mackenzie Gardner and Olivia O’Mara each scored once in the first half for West Haven. The Westies had 24 shots in the game, but Lyman Hall goalie Lauren Cretella made some key saves for the Trojans, finishing with 19.

Westies tie Shelton
Welch scores four goals in 11-11 game
By MIKE MADERA
Westie Blue
(April 23, 2021)  - The West Haven girls lacrosse team moved to 0-4-1 with an 11-11 tie at Shelton Friday evening. West Haven had six different scorers in the contest, but could not pull out the victory.
"The team has been working hard in practice and showed up ready to play,” West Haven coach Joanne Trenchard said.  “We moved the ball better tonight than we have in our previous games.”
Caitlin Welch led the West Haven offense with four goals and an assist, while Brooke Moscato scored twice, and Melissa Tsakonas had a goal and an assist.  Mackenzie Gardner also scored for the Westies.
West Haven led 6-5 at the half, before Shelton flipped the script in the second half. Amber Militrano made 10 saves in the win, including four in overtime.

“Caitlin Welch played a great offensive game and moved the ball well in transition. Julia Tsakonas, Ava Evangeliste, and Maddie Molster played strong defense to help keep out the Shelton offense. Our goals were shared between six different players, showing our ability to move the ball well tonight. Brooke Moscato made key plays in the attack zone. Amber Militrano was our MVP tonight keeping us at a tie score with four amazing stops in overtime."

Sharks top Westies
WH falls 16-3 against SHA
By MIKE MADERA
Westie Blue
(April 30, 2021)  - The West Haven girls lacrosse team fell to 0-5-1 with a 16-3 loss to Sacred Heart Academy Friday evening. The Sharks led 10-0 at the half and never looked back in defeating the Westies.
Mackenzie Gardner led the Westies with two goals, while Julia Tsakonas scored once. Mia Celentano and Emilee DeGrand each scored four goals, while Jianna Cohrs and Lia Prato scored twice in the win.
"We started off the game flat and never got the momentum we needed to take control of the ball,” West Haven coach Joanne Trenchard said. “We need to focus on the basics and working as a team.  Sacred Heart played a strong game and is a tough team. We saw some positives in Julia Tsakonas and Meghan Dupre. Ava Evangeliste and Madison Molster helped to lead the defensive game."

Amber Militano made six saves in the loss for West Haven.

Sharks blank Westies
Hockey trio leads SHA past WH
By MIKE MADERA
Westie Blue
(May 6, 2021)  - The West Haven girls lacrosse team fell to 0-7-1 with a 14-0 road loss against Sacred Heart Academy Thursday afternoon. The Sharks jumped out to a 9-0 halftime lead and cruised to the victory.
The Sharks were led by a trio of WH/SHA girls hockey players as Emilee DeGrand scored five times, Mia Celentano had three goals, and Jianna Cohrs scored once.

The Westies were outshot 25-8 in the contest.

​​​Foran tops Westies
West Haven falls 12-7
By MIKE MADERA
Westie Blue
(May 14, 2021)  - The West Haven girls lacrosse team fell to 0-9-2 with a 12-7 loss at Foran Friday evening. West Haven had the offense going, but could not stop the play of Foran’s Mia Williams who scored five times.

Foran held a 22-19 shot advantage in the contest.

Westies fall to Hamden
O'Mara scores 3 in 9-3 loss
By MIKE MADERA
Westie Blue
(May 18, 2021)  - The West Haven girls lacrosse team fell to 0-11-2 with a 9-3 loss at Hamden Tuesday evening. The loss was West Haven’s fourth in a row,
Olivia O’Mara scored all three goals in defeat for the Westies. Ryan Twohill and Kaitlyn Nutcher each scored three goals for Hamden.

In the win Column
Gardner, Lentine lead WH past Shelton 11-10
By MIKE MADERA
Westie Blue
(May 21, 2021)  - It took until the final game of the regular season, but the West Haven girls lacrosse team is in the win column. Behind three goals and one assist apiece from Madison Lentine and Mackenzie Gardner, West Haven topped Shelton 11-10 at Ken Strong Stadium in West Haven.

West Haven topped Shelton for its first win of the season, May 20, 2021. Photo courtesy of Todd Dandelske.
"Tonight the team celebrated our seniors, captain Mackenzie Gardner, captain Hailey Alfano, and team manager Amanda Tsakonas,” West Haven coach Joanne Trenchard said. “The team all stepped up and played as one as they were winning the game.  Shelton was aggressive and played a tough game. Goals were scored by six different West Haven players giving depth to our offense. Mackenzie Gardner, Madison Lentine and Caitlin Welch played strong offensively and helped to guide our attack. Julia Tsakonas, Lola DiNuzzo and Hailey Alfano were important defensively and worked together to keep the ball out of our defensive end."
West Haven trailed 6-5 at the half, before rallying for the victory. Goalie Amber Militrano made four saves for the Westies.
Olivia O’Mara scored twice and added an assist, Caitlin Welch had a goal and an assist, and Melissa Tsakonas and Julia Tsakonas each had a goal and an assist in the win.

West Haven had a 21-12 shot advantage in the game. 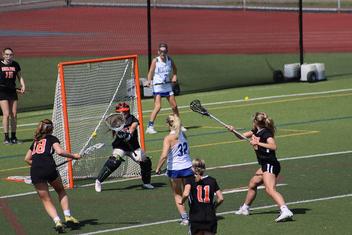 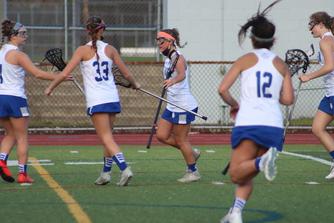